‘The Three Locks’ by Bonnie MacBird 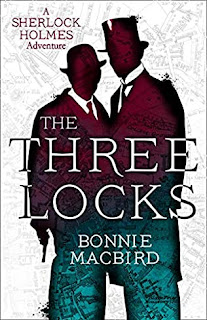 In this prequel to the author’s three already published highly acclaimed Sherlock Holmes novels, Sherlock Holmes with the assistance of his friend and lodger Dr John Watson, has three mysteries to solve. To do so, three locks must be unlocked.

One of these is brought to him by the beautiful and tempestuous beauty, Madame Ilaria Borelli whose husband, the famous stage magician, illusionist and contortionist Dario Borelli, has been sent a human finger. Holmes, with his exceptional scientific knowledge is able establish that the finger had been cut from the hand of someone already dead. But who sent it to Dario Borelli, and is it a message? Could the perpetrator be another stage magician, Santo Colangelo, who had been Ilaria’s lover before she met and married Dario? Santo had subsequently lost a fingertip in an accident while performing and blamed Dario for his misadventure but Ilaria tells Holmes she is convinced that it was not Santo who had sent the finger. When Holmes and Watson attend a performance by Dario, Watson is immensely impressed by Dario’s ability to extract himself from a straitjacket despite being locked into the jacket with an enormous number of locks. Holmes, however, is easily able to assess Dario’s methods. But then there is nearly a disaster – something goes wrong during the act and Dario is nearly drowned. It transpires that one of the locks wastampered with!

The second mystery involves the disappearance of a young woman, Odelia (Dillie) Wyndham, daughter of a Cambridge professor. A young man, Deacon Peregrine Buttons, brings the mystery to Holmes and Watson in Holmes’s Baker Street apartment; at first Holmes is not interested since it appears that Dillie’s family is not concerned and it seems likely that she is simply visiting relatives. But when Buttons reappears and tells Holmes that he has found a doll with one arm torn off belonging to Dillie floating in the water of the Jesus Lock of the River Cam in Cambridge, Holmes believes this indicates a direct threat to Dillie so he and Holmes, with Buttons, depart for Cambridge. However, the Wyndham family do not wish Holmes to be involved and tell him that Dillie’s whereabouts are no concern of his. However, the family maid, Polly, leads them to the lodgings where Dillie has sought refuge from her controlling father who wants her to marry a young aristocrat. She is also being courted by a young Italian scientist; she enjoys keeping both young men, not to mention Deacon Buttons, on a string, something which potentially could cause trouble for her.

The third mystery involves a beautiful silver box which has recently been sent to Dr Watson by a relative, Elspeth Carnachan, his father’s half-sister. Watson had never heard of her before but apparently his mother had given her the box a few days before her death by drowning – accident or suicide? Maybe the box will reveal the truth but there is no key and apparently no way of opening it.

The solutions to these three puzzles are as intricate as anything from the pen of Conan Doyle himself and are woven together in an extraordinarily skilful web which will satisfy all those who revere the intellectual brilliance of Sherlock Holmes. There are references to the scientific discoveries new at the time which add to the interest of this scintillating narrative. Recommended.
------
Reviewer: Radmila May

Bonnie MacBird  is the original writer of the movie TRON, a multiple Emmy winning writer/producer, an accomplished watercolorist, and a classically trained actor. She is a regular speaker on writing, creativity, and Sherlock Holmes. She has written four books on Sherlock Holmes adventures. She lives in Los Angeles.