‘Death of a Painter’ by Matthew Ross 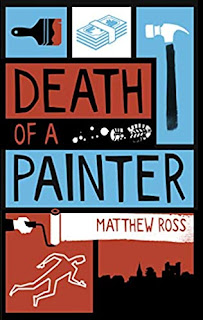 This is a new series set in the Medway Towns on the Kent side of the Thames Estuary and featuring builder/electrician Mark Poynter. Like all builders, he’s got problems, he tells us: everyone you work with wants money off you, everyone you work for wants to keep money from you, and everyone, that’s right, everyone, wants everything done yesterday. Right now, for instance, in the kitchen Mark was in the process of fitting out, there’s a dead painter lying on the floor with his head smashed open, the woman Mark was doing it for is screaming the house down, so the job definitely won’t be finished by Friday and that means that the screaming woman’s husband won’t pay Mark until the kitchen job is completed. And Mark has more than a few bills outstanding and he needs to get money to pay those bills double quick.

What makes it worse is that the dead man was a mate of Mark’s, Tommy, an electrician whom Mark had taken on to fit the new appliances for the kitchen. And when the police arrive, the investigating officer, Detective Chief Inspector Senia, is disbelieving and hostile. He would like to establish that Mark and Tommy had fallen out and quarrelled, or else that Mark had actually been targeted by A N Other who had killed Tommy by mistake. Neither of which is true.

But Senia isn’t Mark’s only problem. For instance, he owes one of his contractors a lot of money from an earlier job who is menacing him, but Mark can’t pay him unless a client for whom Mark had done another job pays him. And that client hasn’t paid up in spite of repeated messages left on the client’s mobile. And when Mark calls on Tommy’s widow to offer condolences, she tells him that Tommy had had a few outstanding jobs – could Mark take them on and either do them himself or find someone else? So kind-hearted Mark takes all Tommy’s papers and finds that there’s not just invoices and so on, but a whole lot of cash. Just what had Tommy been up to? And while Mark is trying to sort out Tommy’s affairs and trying to deal with his own financial crisis which is getting worse and worse, there are other deaths. So, Mark eventually finds himself taking on a job for the local, and somewhat sinister, Mr Big, known simply as Hamlet. And that could be a big mistake. Meanwhile Mark is still being harried by Senia. The only bright spot in Mark’s life is his new next-door neighbour, the beautiful nurse Perry (Parminder) who, when Mark gets beaten up every now and then by various thugs, patches him up. Mark takes a real fancy to her, but how does she feel about him?

I thought this novel was highly enjoyable with a likeable main character. The author’s depiction of life in the building trade, where no job is too big, no dodge too small, and drawn from his own experience, was an excellent and amusing read. Other titles will be forthcoming and there will be, of course, a host of other characters from the building trade who will no doubt find themselves at risk. Recommended.
-------
Reviewer: Radmila May

Matthew Ross was born and raised in the Medway Towns, England. He was immersed in the building industry from a very early age helping out on his father’s sites during school holidays before launching into his own career at 17. He’s worked on projects ranging from the smallest domestic repair to £billion infrastructure, and probably everything in between.  A lifelong comedy nerd, he ticked off a bucket-list ambition and tried his hand at stand-up comedy. Whilst being an experience probably best forgotten (for both him and audiences alike) it ignited a love for writing, leading to various commissions including for material broadcast on BBC Radio 4 comedy shows.  Matthew moved into the longer format of novel writing after graduating from the Faber Academy in London in 2017. Death Of A Painter is his first novel and the first in a planned series of stories featuring Mark Poynter and his associates. Matthew enjoys reading all manner of books - especially crime and mystery; 80s music; and travelling and can’t wait for the next trip to New Zealand to spend time with family and friends. He still lives in Kent with his Kiwi wife, his children and a very old cat.

Radmila May was born in the U.S. but has lived in the U.K. since she was seven apart from seven years in The Hague. She read law at university but did not go into practice. Instead she worked for many years for a firm of law publishers and still does occasional work for them including taking part in a substantial revision and updating of her late husband’s legal practitioners’ work on Criminal Evidence published late 2015. She has also contributed short stories with a distinctly criminal flavour to two of the Oxford Stories anthologies published by Oxpens Press – a third story is to be published shortly in another Oxford Stories anthology – and is now concentrating on her own writing.
Posted by Lizzie at 17:06