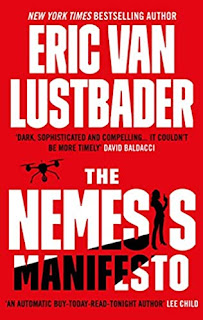 
Nemesis is an extremely nasty, secret cabal whose venomous tentacles extend from those in the highest of power bases to those who are responsible for inflicting the most cruel and tortuous punishments on their fellow human beings.  Nobody, not the Russians, not the Americans, not the Europeans knows who is in charge, or who is bankrolling the cabal’s neo-Nazi, antisemitic, antidemocratic, and disinformation spreading activities.  Those who are actually involved in gathering and spreading misinformation know who their immediate masters are, but the fanatics amongst them aren’t going to tell anybody, and the others become dispensable if they try to share their knowledge.

Evan Ryder is an almost unbelievable super-woman field agent who works for an undercover branch of the American DOD (Department of Defense).  She is called back to Washington by her boss, Ben Butler, who wants her to look into the ghastly deaths of several security agents. Evan and fellow agent, Brenda, travel to a high security hospital to interview a surviving agent but he dies whilst Evan is talking to him. Then their armour-plated vehicle is blown up by a car bomb in the hospital car park. Evan kills the girl who delivered the bomb and discovers she has a chain with Ravens on round her neck. The Raven logo keeps popping up and is clearly associated with members of Nemesis.

Whilst this is going on the two Russian security chiefs- military and civilian – are at loggerheads. Unbeknown to each other they have, or want to have, information about Nemesis.  Between them they want Evan killed - she has dispatched too many Russian agents and Ben discredited a) because he’s a Jew and b) because he’s too good at his job.  Unfortunately, a highly placed Russian stooge in the American administration ensures that the crusade to discredit Ben leaves him with no friends in high places.  His one remaining friend, Isabel, is Ex-Mossad but it is difficult to know whom she works for now. She has befriended two men, Roger Hollis and Peter Limas who run a high-tech cyber security firm – just the ticket for data mining activities for whichever nation’s security service, or services, wants information and is willing to pay.  Roger has a badge with two ravens on it.

The Nemesis Manifesto is an incredibly convoluted and complicated tale.  Past histories, lost memories, and Evan’s personal nightmares along with those of her friend, the former Russian spy Lyudmila Shokov and her family are woven into the story. So much so that by the end of the tale, Lyudmila’s family has taken centre stage. She remains absent until the last couple of pages when Evan finds her in Sumatra and the stage is set for the second thriller featuring Evan Ryder.  If it is anything like the first book, it will be full of uncertainty about who Evan can trust, which might explain why she prefers to work alone. It will also be overflowing with violence – no need to worry about Evan, she can cope with pagefuls of hectic action and death, and very little in the line of happy endings.  Those well versed in international spy thrillers that whiz between countries: Russia, America, Germany and Austria in this case, whilst lesser agents die and the invincible hero/heroine tries to preserve a decent, democracy for the rest of us, will love this book.
------
Reviewer Angela Crowther

Eric Van Lustbader was born and raised in Greenwich Village. He is the author of more than twenty-five best-selling novels, including The Ninja, in which he introduced Nicholas Linnear, one of modern fiction's most beloved and enduring heroes. The Ninja was sold to 20th CenturyFox, to be made into a major motion picture. His novels have been translated into over twenty languages.

Angela Crowther is a retired scientist.  She has published many scientific papers but, as yet, no crime fiction.  In her spare time Angela belongs to a Handbell Ringing group, goes country dancing and enjoys listening to music, particularly the operas of Verdi and Wagner.
Posted by Lizzie at 12:41