‘And The Sea Darkened’ by Vicki Lloyd 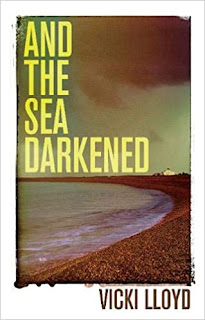 Just off the coast of Essex, linked to the mainland by a causeway, is the island of St Cedd, barren, windswept, surrounded by the snarling sea which eats away at the land. Legends and myths about the island abound: tales of wreckers who decoyed boats to the shore and then killed the survivors; men who can turn themselves into wild beasts and kill at random; ghosts who stalk the land, taunting people whom they drive to madness; malignant sea-dwelling females who lure boats onto the rocks or into the deadly sinking sands.

Two brothers live on the island. Magnus Bostock farms Slegholm Farm in the way that his ancestors have farmed for generations, something that he finds increasingly difficult while his wife, dour, tight-lipped Brenda, wants him to adopt more modern methods. Magnus’s brother Nick will have nothing to do with the farm or farming; although when younger he managed to get away he now finds himself back on St Cedd and trying to make a living taking tourists out on fishing trips. But this isn’t enough, and he finds himself drawn into exploiting the misery of illegal migrants escaping the turmoil of wars elsewhere. This is something that Nick doesn’t want to be involved in, and neither do his two mates who are also involved. But when he tries to tell the sinister Patrick Rokesmith, organiser of the ring of human traffickers, that he wants to give up, Rokesmith threatens him. And there are people behind Rokesmith who are yet more sinister. And then Rokesmith starts to draw in Magnus into the evil activity. This enrages Brenda who can see the dangers involved in the activity.

There is another development when property developer Ethan Langeveldt, an associate of Rokesmith, first buys a field next to Slegholm Farm and parked caravans on it, then obtains planning permission to build houses. This would put paid to Brenda’s ambition to expand Slegholm Farm and make it profitable. Worst of all, someone (or something) is killing Magnus’s sheep, slashing them in a way almost reminiscent of a wild beast. Without any clues as who (or what) and why there is little the police can do.

Not everyone on St Cedd’s is as doomladen as the Bostock brothers .Elaine Maples, landlady of the Dog and Whistle Inn, who although she dislikes life on the island, runs the pub with considerable efficiency although with nothing like the help she feels she ought to be getting from her teenage son Alex and her idle barman Dave. And there is the young girl, Morgan Welland, fey and other worldly, who lives alone in an isolated cottage with only the birds and other wildlife for company. She is aware, as few others are, of the evil on St Cedd although she has no idea of the form it would take and what it would do.

Into this strange mixture of real-life criminality and ancient evil comes Jasmin Kapoor, a young academic who is researching the violent Indian Mutiny of 1857 in which atrocities, such as the Massacre of Cawnpore, were committed by both sides. Jasmin has a personal stake in the research - her own ancestor was killed during the Mutiny – and she believes that a forebear of the Bostocks, great-great-great grandfather of Magnus and Nick, James Bostock, was among the senior officers at Cawnpore and was involved in the pitiless retribution by the British authorities. Magnus’s and Nick’s grandmother, now very ill in a nursing home, knows that there are papers but does not wish to discuss the massacre with Jasmin. But when Jasmin eventually lays hands on the papers something much worse is awakened.

I found this story not just fascinating but enthralling. The power of the writing, the evocation of the bleak, unlovely landscape, grabs the reader and will not let go. St Cedd may be based on an actual place or it may be entirely the creation of the writer’s imagination; whichever it is, it is a strange, uncanny place, best avoided.
------
Reviewer: Radmila May

Vicki Lloyd lives in Oxford and has a degree in Latin and English from the University of Kent and a Masters in Creative Writing from Oxford Brookes University. Throughout her career, she has worked as an archaeologist, journalist, copy editor, playwright and short-story writer.