‘The Blitz Detective’ by Mike Hollow 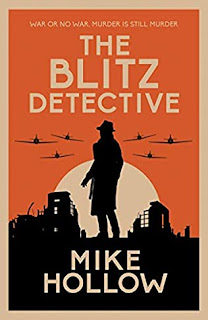 It is September 1940 and London is being subjected to successive bombing attacks by the German Luftwaffe.  East Enders are suffering more than most by virtue of the docks which are a prime target for the enemy.  Detective Inspector John Jago knows the area well.  He was born and bred there and now works out of the police station at West Ham.  Jago’s usual partner, Detective Sergeant Clark, a reservist, has been called up to fight in France and was recently replaced by Constable Peter Cradock.  The young DC clearly revels in his promotion but is finding it hard to strike the right balance with his new boss.  Whatever their reservations about each other however, they simply have to get on with the job and they soon have an opportunity to do just that.

During a fierce air raid in Plaistow, Warden Ron Davies finds a dead body at the wheel of a van parked by the roadside.  The warden suspects foul play and orders a passing ARP messenger to contact the police.  Jago and Cradock make their way to the scene.  On their arrival, Jago recognises the dead man as Mr Charles Villiers, a successful businessman who is also a local magistrate.  Villiers has three visible wounds and a knife lying in the van is retrieved, but before the detectives can make a more thorough inspection the aerial bombardment recommences and forces them to take cover.  To their horror a direct hit destroys both the vehicle and its occupant.  With no body and precious little evidence, Jago’s detective divisional inspector is reluctantly persuaded to allow his officers to investigate the crime.

It quickly transpires that Villiers and his wife were less than content in their marriage and Jago begins to suspect that the Justice of the Peace might not be as law abiding as his position would suggest.  As Villiers’ associations and shady dealings are revealed, so the list of those who might have wished him dead grows.  When a second murder takes place, the situation is further complicated.

This is an unusual and compelling novel with interesting characters whose lives attest to the hardships of war.  Indeed, the futility and irony of war is a major theme that permeates the story.  Jago is a complex and reflective protagonist.  He still suffers from the traumas he endured during the 1914 -18 conflict when he served as an officer in the trenches.  Jago’s experiences link with another plot that unfolds during the narrative and that focuses on far-left ideologies that attracted support from sections of the population during the period.  The obvious inequalities in British society at the time are explored through the lives of two brothers and their widowed mother.  Jago’s empathy for the family is often poignant without detracting from the DI’s determination to solve the crime at the centre of the story.

The Blitz Detective is the first in a series written by Mike Hollow.  The author’s affection for East London shines through the police procedural. His research of the period and the people who inhabited the area during World War II make for fascinating reading and never detract from the intriguing plot.  This is a thoughtful novel, well-balanced, well-paced and well-crafted.  I enjoyed it tremendously and look forward to reading the sequel.
------
Reviewer: Dot Marshall-Gent

Mike Hollow was born in West Ham, on the eastern edge of London, and grew up in Romford, Essex. He studied Russian and French at the University of Cambridge and then worked for the BBC and later Tearfund. In 2002 he went freelance as a copywriter, journalist and editor. He's a published poet, and nowadays when not writing about the Blitz Detective he makes his living as a translator. He lives in Hampshire, England, with his wife Margaret.

Dot Marshall-Gent worked in the emergency services for twenty years first as a police officer, then as a paramedic and finally as a fire control officer before graduating from King’s College, London as a teacher of English in her mid-forties.  She completed a M.A. in Special and Inclusive Education at the Institute of Education, London and now teaches part-time and writes mainly about educational issues.  Dot sings jazz and country music and plays guitar, banjo and piano as well as being addicted to reading mystery and crime fiction.
Posted by Lizzie at 20:17