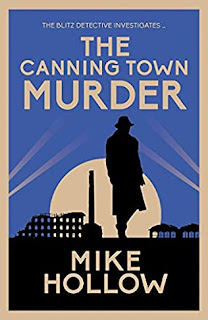 
It is September 1940 and London, amongst other British cities, is enduring the nightly horror of the Blitz. The bombing causes death and carnage, but also exhaustion as people struggle to work after nights of fear, cold and discomfort in primitive air raid shelters. For Detective Inspector John Jago and many other men who served in the First World War, the Blitz brings back hideous memories of bombardment in the trenches.

After a night disturbed by the bombing, Jago is summoned to a badly damaged street in Canning Town, where rescue workers have discovered the body of a young woman. To find dead victims after an air raid is not unusual but the rescue team are certain that the body had not been there when they first attended the damaged houses to check whether anyone was injured or buried in the rubble; they had left the street and when they returned, sometime later, they discovered the dead girl. Jago and his assistant, Detective Constable Cradock, cannot find a handbag or any belongings to identify the dead woman, and although the first doctor on the scene cannot find any sign of foul play, a keen-eyed pathologist confirms that the woman was strangled.

The dead woman is identified when the head of personnel at an engineering firm reports that one of their employees, Miss Mary Watkins, has not turned up for work. One or two of Mary’s colleagues speak kindly of her but Jago can find nobody who is really close to her or cares about her death. Not even Mary’s sister, her closest living relative, has any affection for her. Jago discovers that components and chemicals are going missing from the engineering firm and wonders whether Mary was involved with these thefts or whether she had discovered something about them that led to her death. Hitler’s forces are just over the Channel in France and Britain is in a state of high alert. Many people believe that invasion is imminent, while others believe Nazi propaganda and maintain that the government was wrong to have not allied with Germany from the start. There is talk of the Fifth Column, with enemy agents and sympathisers active in Britain and blending into the general population. This makes a difficult and complex situation for the investigation of a single murder, and the deeper Jago delves into Mary’s life, the more motives he discovers for killing her, but who, amongst the people she had deceived and betrayed, had resorted to murder?

The Canning Street Murder is the second book in the World War Two series featuring Detective Inspector Jago. It is a superb evocation of a tense and dangerous time, with excellent period detail and a convincing portrait of the attitudes prevalent near the start of the war. The plot is intricate, clever and neatly interwoven, and Jago is an intelligent, engaging protagonist. The Canning Street Murder is an intriguing and thoroughly enjoyable read, which I recommend.
-------
Reviewer: Carol Westron

Mike Hollow was born in West Ham, on the eastern edge of London, and grew up in Romford, Essex. He studied Russian and French at the University of Cambridge and then worked for the BBC and later Tearfund. In 2002 he went freelance as a copywriter, journalist and editor. He's a published poet, and nowadays when not writing about the Blitz Detective he makes his living as a translator. He lives in Hampshire, England, with his wife Margaret.

Carol Westron  is a successful short story writer and a Creative Writing teacher.  She is the moderator for the cosy/historical crime panel, The Deadly Dames.  Her crime novels are set both in contemporary and Victorian times.  The Terminal Velocity of Cats the first in her Scene of Crimes novels, was published July 2013. Carol recently gave an interview to Mystery People. To read the interview click on the link below.
https://promotingcrime.blogspot.co.uk/2017/11/carol-westron.htmlwww.carolwestron.com
http://carolwestron.blogspot.co.uk/
To read a review of Carol latest book This Game of Ghosts click on the title.
Posted by Lizzie at 13:19