‘The Merry Month of Murder’ by Nicola Slade 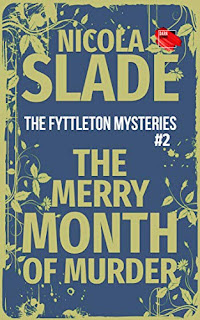 
The story opens at the end of April 1918 and follows the stories of Alexandra (Alix), Christabel (Christy) and Adelaide (Addy) Fyttelton. The three sisters are well- born but far from wealthy young women, who are struggling to make a reasonable living despite rationing and other privations of war, while they still mourn the death in the trenches of their much-loved brother, Bertie. The narrator of the story is eighteen-year-old Christy, the middle sister and the sensible one. Alix is sweet-natured and hard-working, but she is wrapped up in her dream of finding the perfect husband, while fifteen-year-old Addy is intellectually brilliant but tempestuous and emotionally immature. Their mother helps the family finances by her popular romantic novels but lives more in her fictional world than in real-life, so it is Christy and her practical grandmother, Lady Elspeth Gillespie, who deal with the practical aspects of family survival.

Although the family has little income, they do own two houses, the one they live in and another next door. One way that Christy and her grandmother contrive to earn more money is by having redecorated the spare house and renting rooms to the female relatives of soldiers who are recuperating at the nearby military hospital, Groom Hall. At the start of the book, a new group of convalescent soldiers are due to arrive, which means that there are relatives looking for accommodation. Soon Christy welcomes a meek, down-trodden lady who is grateful for the respite from her overbearing husband, a hearty woman with prodigious energy and an appetite to match, and a fearful, very young bride who is in the last weeks of pregnancy.

Although Christy has not considered marriage, she has an increasingly warm friendship with Harry Makepeace, a young officer, now discharged from the army and working as a solicitor. Harry had been a friend of their brother, which makes him a welcome guest. The family are delighted to meet Harry’s cousins, Mr Edgar Makepeace and Miss Bertha Makepeace, but are less happy about the constant intrusions of Bertha’s friend, Miss Portia Diplock, a domineering woman who believes she has the right to order everybody about, especially younger people like Christy and her sisters.

All continues well with the family: the new lodgers form unlikely friendships, a new, small, temporary school is established in the basement, and Alix seems to have finally met her longed-for perfect mate. In the meantime, Addy helps Christy to come to a decision about her own writing, switching from stories for boys about adventures in the trenches, which Christy had found increasingly depressing, to school stories for girls. The sisters are looking forward to the May Day celebrations in the town, although determined not to be bullied into joining the dancers around the maypole. When a sudden death occurs everybody is shocked and, despite her youth, Christy finds herself assisting the doctor. It is assumed that the death is from natural causes, but Christy finds herself in possession of information that indicates otherwise and has to decide whether taking the matter further is the right thing to do.

The Merry Month of Murder is the second in the Fyttelton mysteries and could be classified as the cosiest of cosy mysteries. It is a delightful read, with fascinating historical detail and thoroughly engaging characters, especially Christy, whose wryly humorous narrative is a delight. In many ways, it reminded me of the ‘Little Women’ books, only for an adult audience and with the odd suspicious death thrown in. This is book that is great fun from beginning to end and a very easy and enjoyable read.
------
Reviewer: Carol Westron

Find out more about Nicola at
www.nicolaslade.wordpress.com 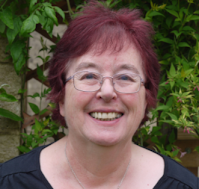