‘An Isolated Incident’ by Emily Maguire 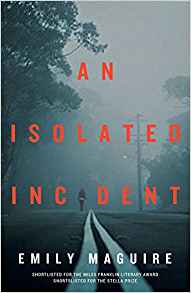 Strathdee, a small Australian town situated about halfway between Sydney and Melbourne on a highway between those two cities, isn’t much of a place. But it is the town where two half-sisters, Chris Rogers and Bella Michaels, grew up. In some ways the sisters couldn’t have been more different. Bella, much the younger, is kind and caring; she works in an aged-care home. No-one has a bad word to say about her. Chris couldn’t be more of a contrast. She works in a bar whose principal customers are the truckers who drive the highway. She’s popular with the truckers because they know that, if they ask, they can stay over at her place on the understanding that the next morning they will leave money for her. And they also know, that with her fiery temper, she is not to be messed with. Only one trucker has been much more than a one-night stand, Nate, a giant bearded bear of a man to whom Chris was married for a few years until her deep-seated anger against the world turns itself on him and he leaves. Driven by that anger and an equally deep-rooted despair, both resulting from a violent father and an inadequate mother, Chris also drinks heavily. Only Bella’s love for Chris and Chris’s love for Bella stand between Chris and total surrender to her demons. And then Bella’s body is discovered on waste ground, brutally mutilated. There is plenty of violence in Strathdee, much by men against women, but who could have wanted to turn it on the sweet and gentle Bella, loved by all who knew her? Torn apart by grief and rage, which the concern shown by some of her neighbours cannot assuage and only Nate’s arrival is of any consolation. And Chris knows that Nate cannot stay; he has a new woman and he must return to her sometime.

To top Chris’s misery there is, of course, a media storm. Among the first on the scene is May Norman who works for an on-line news journal. But May’s mind is only partly on the job: she had been having an affair with a married man called Craig. Now he has ended the relationship and she is devastated.  And then, Nate who has a history of violence although only for one incident and that many years ago, is arrested.

This is not a crime novel – we learn only incidentally that Bella’s killer has been identified. But it does seem that Chris will be able through friendship to start working through her problems and that May will be able to focus on what she wants to do. This is is an excellent novel which has been shortlisted for a prestigious literary award in Australia which I would describe it as admirable, rather than enjoyable. With its emphasis on the violence perpetrated by so many men against women it is a grim expose of a problem which only recently is being brought out into the open especially now that the MeToo movement has become so prominent. Recommended.
------
Reviewer: Radmila May

Emily Maguire is the author of five novels and two non-fiction books. Her latest novel, An Isolated Incident was shortlisted for the Stella Prize, the ABIA Literary Fiction Book of the Year and the Miles Franklin Literary Award. Emily’s articles and essays on sex, feminism, culture and literature have been published widely including in The Sydney Morning Herald, The Australian, The Observer and The Age. Emily works as a teacher and as a mentor to young and emerging writers and is the 2018 Writer-inResidence at the Charles Perkins Centre at the University of Sydney.
https://www.emilymaguire.com.au