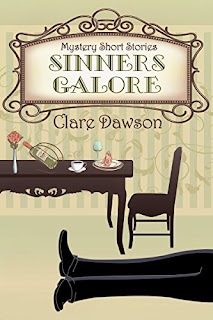 Sinners Galore is a collection of five mystery short stories each boasting quirky and unexpected endings.

In Day of Reckoning, Sid Granger is devastated when his daughter Sara is kidnapped.  The successful but corrupt businessman fights against the clock to secure his child’s release in a narrative of vengeance and fear with a delicious twist in the tail.

Beppo Marachini is the Supergrass of the next story.  The informer had provided DCI Bernard Christie with the information he needed to put gangland boss Ivan Thornburn behind bars two years earlier, but when Thornburn escapes from prison the lives of Beppo and his family are placed in jeopardy.  Christie, aware that the sadistic criminal will seek revenge, must think of a plan that will return Thornburn to prison, but at what cost to his informant?

To Have and to Hold is a tale of deception - and worse.  When her father dies unexpectedly, Laura Cresswell-Stevens is shocked to find that he has gambled away his fortune and her inheritance.  To pay off his remaining debts, she is forced to sell the beautiful manor house she has shared with him since childhood.  The new owner Ken Halstead, a sixty-year old tycoon, however, has eyes for Laura as well as the house.  A marriage would enable her to salvage the house she loves and … a little more besides?

Billy Sheldrake sets off for town on Carnival Day hoping to use his pickpocketing skills to good effect.  Disguised as a vicar he patiently waits near a convenient cashpoint until he spies an elderly lady withdrawing a large amount of money.  He is about to strike when he is beaten to his prey by another robber and unexpectedly finds himself rescuing the woman and her cash as his day takes a surprising turn.

The final story of the collection is The Inside Man. Terry Barnwell, aka ‘Barney,’ is a young repeat offender who recently served a prison sentence for his part in the burglary of a jewelry shop owned by Toby Davenport.  When Davenport is reported missing by his wife, D.C.I. Clem Evans and D.S. Chris Farley are called in to find him.  After three weeks, their investigations reveal that the entrepreneur was last seen at a local pub where he had shared a pint with Barney.  The villain’s alibi cannot be disproved but officers find this meeting too much of a coincidence to be ignored.  The clue that helps the detectives solve the mystery eventually emanates from an unexpected source.

This is a super collection of five entertaining short stories that are perfect for the Kindle platform.  Clare Dawson’s bite-sized tales have intriguing plots and surprising endings.  Her characters are interesting, and the author packs a great deal of punch into a minimal amount of words making this a most enjoyable read.
------
Reviewer: Dorothy Marshall-Gent 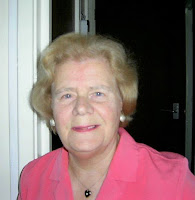 Edna Jones has been writing novels, articles, book reviews and short stories for some years. Using the pseudonym Clare Dawson for crime novels and short stories, a few other pseudonyms had been used for romantic fiction etc. Born in the West Midlands she has had a variety of jobs, is now retired and lives in Cambridgeshire. She has had two crime novels published (one as an e-book) and several short stories in various anthologies and magazines here and abroad. As well as reading Edna enjoys outdoor life, travel, and crosswords.