Shona McLean talks about her writing to Radmila May 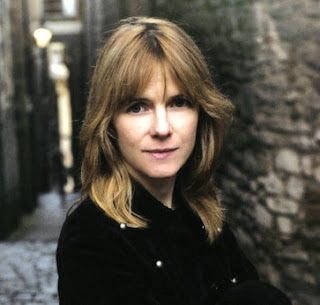 Shona (S G) MacLean was born in 1968 in Inverness and grew up in the Scottish Highlands where her parents were hoteliers. She is the niece of world-famous thriller writer Alistair MacLean.
Shona obtained an MA and PH.D. in History from Aberdeen University. She began to write fiction while bringing up her four children on the Banffshire coast. She has now returned to live in the Highlands, where her husband is a head teacher.
The Redemption of Alexander Seaton was short-listed for both the Saltire first book award and the CWA Historical Dagger;
The Seeker was winner of the 2015 Historical Dagger.

Radmila: What led you to want to write and in particular to want to write crime fiction?
Shona: From a very young age I thought it would be a wonderful thing to be a writer – to live by making up stories for other people. My Grandfather, a Gaelic-speaking Church of Scotland minister, had had several devotional works published, and his 3rd son, my father’s brother Alistair (MacLean), was a very successful story-teller. It seemed a perfectly possible and natural thing to do with your life if you loved books. As for becoming a crime-writer, that was by default. I have always loved crime fiction from The Famous Five via Agatha Christie, Ellis Peters and Arthur Conan Doyle to Henning Mankell and Reginald Hill, but I had not planned that my first book (The Redemption of Alexander Seaton) should be a crime novel. It was intended more as a study of a young man’s life. I needed some seminal event that would change his life in some way, and I decided to put in a murder … hence I have been a crime writer ever since.

Radmila: And what then led you to historical crime and in particular to the 17th century?
Shona: It was a lifelong fascination with the past that led me to historical crime. I cannot pass a gateway in a tumbledown wall without wondering where it used to lead to or come across an evocative street name without wondering what its origins were. I studied history (mainly medieval) at Aberdeen University and went on to do a PhD in C17th Scottish educational history, mainly because the sources for what I was most interested in were not available for the medieval period, but abundant for the late C16th and C17th. When I ventured into the seventeenth century I was utterly beguiled by the voices of the people, the man and woman in the street, as well as the middling sort – doctors, teachers, lawyers - making themselves heard in the historical record of the time. I think that is why I am much more interested in writing mysteries about ‘ordinary people’ than in the Great and the Good.

Radmila: And then you shifted from Scotland to England and from the decade immediately preceding the Civil War to the Protectorate. Why was that?
Shona: My Alexander Seaton series was set in the decade running up to the Wars of the Three Kingdoms (of which the English Civil War was part). It was a fascinating time in Scotland, and I planned to take Alexander and his friends into the 1640s and the Wars of the Covenant, which were particularly brutal in Aberdeen, around where the books were mainly set. However, my publishers were very keen that I should send Alexander to London. To cut a long story short, I found that he would not go! I thought I and they (Quercus Books) had come to a parting of the ways, but then I saw a documentary by Dan Cruickshank in which he looked at 17th century London. It was when he came to the advent of the London Coffee House in the 1650s, with their potential for all sorts of people coming together to exchange news, gossip and to spy upon their enemies, that I realised I was absolutely hooked and that it would make a great setting for a story. Of course, the 1650s was the era of the Cromwellian Protectorate and a time of republican dissent and royalist plotting, and making my detective character (Damian Seeker) an intelligence officer in Cromwell’s Whitehall allowed me to distinguish him quite clearly from the spiritual and reflective Scottish academic, Alexander Seaton. Having moved my setting on by two decades, I was able to feature Alexander Seaton’s step-son, Zander, now grown up, in the first Seeker book.

Radmila: It will only be a few years before Cromwell dies and is briefly followed by his son Richard after which there is the Restoration and Charles II comes to the throne. Will you go on into that period?
Shona: I think the Seeker books will probably finish at the Restoration, but I’m not going to say how!

Radmila: Do you think that historical fiction has anything to teach us (apart from actual history)?
Shona: I think I’m possibly in the minority in this amongst my fellow writers and readers of historical fiction, but I think it should primarily be for enjoyment. If the novelist is doing her or his job well, they will show their reader a glimpse of how things might have been, but we can’t rely on fiction being proof-tested in quite the way straight history is, and I think it would be dangerous for a historical novelist to claim they are giving their readers a more accurate insight into the past (as I have heard some claim) than an academic historian, subjected to the rigours of peer review, will do. I think a good historical novelist should try as hard as they can to get context and detail right, whilst making sure they tell a really good story.

Radmila:           How do you cope with research? Do you sometimes feel overwhelmed by the need to dig out more and more information?
Shona:               I read as much as I can, and probably a bit more than I should, until I decide I really have to put the books away and start writing. I have in the past ‘over-researched’ things – e.g. logging on the river Bann in the C17th - which might contribute only a line or two to my book, so I try to discipline myself not to endlessly look for more.

Radmila: Do you plot in detail, or just get an idea and then start?
Shona: I plot in as much detail as I can before I start writing, but inevitably, my outline expands (usually to at least two times the size) as I write, so that an initial 12-chapter novel will have at least twenty-four. I do tend to know who all my characters will be before I start, but not always who the murderer will be or why!

Radmila: Is there anything else you would like to say?
Shona: Writing what I write is, for me, the best job in the world!

Radmila: After St Hilda’s you went on to co-tutor with fellow historical crime writer Andrew Taylor a week-long course on writing Historical Crime Fiction at the Scottish creative writing centre at Moniack Mhor (near Inverness). How did it go?
Shona: It was really illuminating in terms of learning a little more about other writers’ processes. In terms of planning a novel, Andrew is much more flexible than I am, and he is also much more adept at embracing new technologies. I am something of a Luddite, with an almost physical aversion to the online world, but I did learn from Andrew and the students of one or two internet resources that I really should be trying to use! I also learned that Andrew had scripted some episodes of Bergerac, which was something of a revelation as I was a huge Bergerac fan. The one thing we did discover we both do is create our own maps of the places we are writing about, so that we can move our characters about them with confidence. The students seemed to find this idea quite liberating. I imagine Andrew’s maps are significantly better-drawn than mine! Possibly the most interesting aspect of the week was that we each saw different strengths and possibilities in the students’ writings, which is refreshing as it suggests that there is no ‘right’ way to write a historical novel (although there are definitely some wrong ones) and bodes well for a variety of reading experience in the future.