‘The Tall Man’ by Phoebe Locke 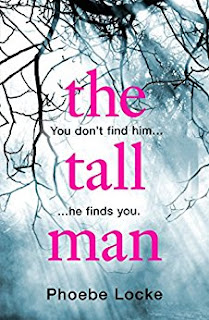 The Tall Man explores the story behind the urban myth of the Tall Man, a supernatural being who comes from the shadows to take daughters away. There are two ways the Tall Man will deal with a young girl, he will make her special or he will kill her. Young girls across the country embroil stories about the Tall Man and for some there are dangerous consequences.

What makes this book different is the use of the documentary team as the investigative device. The fly-on-the-wall documentary, with its insatiable public appetite for turning murderers into celebrities, merges factual re-telling with intrusive, emotional manipulation to produce tasteless entertainment, acclaim for the producers, and high ratings.

The story is told over three time-lines. In the present day the documentary film crew have managed to get access to seemingly self-obsessed teenager Amber Banner who was acquitted of murder. Questions regarding the truth of what actually happened remain unanswered and the identity of the murder victim is part of the mystery for the reader. We follow the investigation through the lonely, insecure character of Greta, the researcher/producer who is being pressurised by her boss to get the dirt on Amber by whatever means and irrespective of the consequences. All through the book the reader is left wondering if Amber is guilty of murder or the unwitting victim of something?

Interspersed with this is the story of a haunted character, Sadie. In 2000 as a new mother, fearing for her child’s safety Sadie abandons her family completely, severing all contact. Then, in 2016, thinking that it is now safe, she returns and starts to build a relationship with her daughter and estranged husband. As the book progresses, the stories converge, and we find out the unanswered questions about who was murdered, how and why.

The Tall Man is the debut novel of Phoebe Locke and is listed on Amazon as a series so there may be more using the same film crew investigative device to explore other stories, a concept that I really liked.
-------
Reviewer Christine Hammacott
Phoebe Locke is the pseudonym of full-time writer Nicci Cloke. She previously worked at the Faber Academy, and hosted London literary salon Speakeasy. She lives and writes in London.