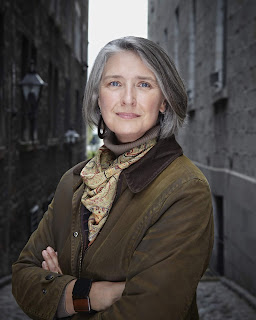 Louise Penny was born in Toronto in 1958 and became a journalist and radio host with the Canadian Broadcasting Corporation, specializing in hard news and current affairs. Her first job was in Toronto and then she moved to Thunder Bay at the far tip of Lake Superior, in Ontario. Louise had always dreamed of writing and says, ‘Michael's support allowed me to quit work to write’.
Louise and Michael were married for 20 years. He died September 2016.
The Chief Inspector Gamache books have found a world-wide audience, won awards and ended up on bestseller lists including the New York Times’. Louise says Gamache was inspired by her husband, a kindly, thoughtful, generous man of courage and integrity.
She lives outside a small village south of Montreal, quite close to the American border
http://www.louisepenny.com/

Lizzie: I see that your latest book Kingdom of the Blind will be published 27 November 2018.  Can you tell us about this book, and how Gamache is faring with his quest against the deadly drug trade?
Louise:   The book is, at its core, about all the ways we’re blind.  All our blind spots, and the dreadful things that come out of them.  In Kingdom, Gamache is faced with the knowledge he intentionally allowed opioids onto the Montreal market, in order to trap a larger prey.  But now he must get them back.  And to do that he must consider the inconceivable.  At the same time, he and Myrna find themselves named in the will of a woman they’ve never met.  Who left a fortune she didn’t have.

Lizzie: When writing do you plan your plots before you start?  And, if so, do your books change during the writing process? So often writers say that the characters take over, resulting in a different ending and sometimes perpetrator. Do your books pan out exactly as you originally planned?
Louise: I have a general idea of the theme of the books.  My books are absolutely crime novels, but are not, primarily about the crime.  That’s an act, not a theme. So, yes, I have some idea of the plot…who died, who did it, and the why.  And the over-arching theme.  But that can change as the book goes along

Lizzie: When embarking on a new book, what area of the book challenges you the most?
Louise : The first draft….which is always a mess, as I explore ideas that don’t pan-out, new characters who don’t work, plot lines that whither.  I generally have four or five drafts, as I try to pull it all together, and work on structure, pacing, themes, character evolution.  So yes, the first draft is hellish….and smelly.

Lizzie: You have said that your husband Michael was the inspiration for Armand Gamache.  What of Clara, Ruth, Gabri and Olivier, are they based on any people you have met?
Louise:   Every character was inspired by someone I care about….but that’s the DNA, their actual development is theirs alone.

Lizzie: Kingdom of the Blind is the 14th in the series.  Have you ever felt that you would like to try something different?  A stand alone, or a new series.  Is there any character in your head that is longing to get out?
Louise:   No, I find the Gamache books allow me to explore all the issues of human nature that fascinate and often baffle me.  Am continually finding elements in the characters, and in the nature of crime fiction, that allow me to grow as a writer.  I hope.  Besides, writing the books give me joy….when I don’t want to jump off a cliff.

Thank you, Louise, for taking the time to talk to chat to me.  Thank you!