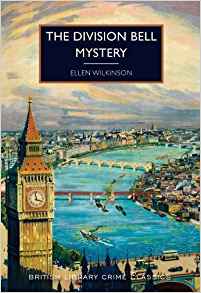 This book, now available in the British Library Crime Classics Series, was first published in 1932 by George G. Harrap & Co. The author, Ellen Wilkinson, had been elected to Parliament in 1924 and had been one of the first of the very few women M.P.s (and the only woman on the Labour benches) to be elected. However, when she lost her seat in 1931, she was faced with the necessity of earning a living and turned to various forms of writing including the overwhelmingly popular crime fiction genre.

The story begins with the protagonist, Conservative M.P. Robert West, Parliamentary Private Secretary to the Home Secretary, who is waiting for his friend, Donald Shaw, whom he will be taking to dinner in the most elegant of the various dining-rooms available for entertaining. However, they have to cut the dinner short because Robert has to take part in an important vote and it is while they are passing along the corridor where the Home Secretary is dining tete-a-tete with the American multi-millionaire Georges Oissel who it is hoped will provide a desperately-needed loan to help the country out of the financial morass resulting from the Wall Street Crash of 1929 and the consequent Great Depression which had led to so much unemployment and desperate poverty. But as the division bell rings out, there is the sound of a shot from the room where the Home Secretary had been dining with Oissel. The Home Secretary had, like Robert, had to leave for a few minutes to vote so Oissel had been alone for a few minutes. And during those few minutes, he had, so it first appears, committed suicide. After all, there was a recently-fired revolver nearby. But why should Oissel have committed suicide? And in such a manner, and at such a time? Oissel’s granddaughter, the beautiful Annette, is convinced it would have been completely out of character. And then it appears that the medical evidence shows that Oissel did not after all shoot himself. But in that case, by whom? Although the inquiry is headed up by the police in the shape of Inspector Blackitt Robert is drawn into the search to uncover the truth, not just out of a natural desire to know, but by his growing attraction to Annette. Others also become involved such as Robert’s friend Don, the journalist Sancroft, Annette’s current beau Philip Kinnaird, Sir George Gleeson, the top Home Office civil servant, the young Labour M.P. Gracie Richards and the older Conservative M.P. Ivy, Lady Bell-Clinton. And there is, of course, a missing note-book. And another murder.

All this adds up to a fascinating mix. The characters are lively and varied with Robert himself most sympathetically portrayed for all the author’s own committed Socialist principles (being red-haired and very small one of her soubriquets was The Fiery Particle) and I personally found her portrayal of life in the House of Commons really interesting. This novel was her only venture into crime fiction: she was re-elected in 1935 and went on to serve in Churchill’s government during the War and briefly as Minister for Education in the post-War Attlee government before her too-early death in 1946. No doubt she contributed a great deal to public life as an M.P. but it’s a pity we don’t know any more of Robert’s later life nor of any of the other characters. Maybe some writer of today will take up the baton . . .

There is an excellent Preface by the Labour M.P. Rachel Reeves who discovered the novel while researching Ellen’s life for a biography and a most interesting Introduction, Politics in the Golden Age, by Martin Edwards.
Highly recommended.
------
Reviewer: Radmila May 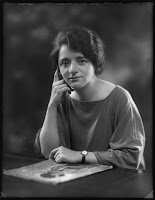 Ellen Wilkinson (18911947) was a Labour Party politician, who played a prominent role in the Jarrow March and served as Minister of Education from July 1945 until her death. Earlier in her career, as the Member of Parliament (MP) for Jarrow, she became a national figure when she played a prominent role in the 1936 Jarrow March of the town's unemployed to London to petition for the right to work. Although unsuccessful at that time, the March provided an iconic image for the 1930s and helped to form post-Second World War attitudes to unemployment and social justice.