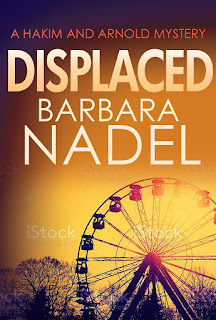 The background of this story, the fifth in the series featuring Lee Arnold and Mumtaz Hakim of the Arnold Private Investigation Agency in London’s East End, is the continuing fallout of the disruption in Europe resulting from the post-World War II chaos after the fall of the evil Nazi regime. Now their help is being sought by the elderly Orthodox Jew, Irving Levy, whose family has for generations traded in diamonds in Hatton garden off Holborn Circus. He is suffering from a terminal disease and, having recently had a DNA test, has discovered that his mother was not Jewish at all which makes him, according to Orthodox Jewish doctrine, not Jewish but Gentile. Since he never married and is rich to whom should he leave his wealth? To some cousins on his father’s side whom he hardly knows and does not like? Or should he try and find his true mother? He knows that his father was in the British Army during and after the War and met and married his mother, a refugee, in Berlin. And there is another mystery: his baby sister had been abducted while she, his mother, and he had been at the Barking Park Fair. Baby Miriam Levy had never been seen again, but if he could find her or any descendants he could leave his wealth to her or them. Lee and Mumtaz, intrigued by this double mystery, first discover that the house where Irving’s father had encountered his mother had in fact been in the Russian sector of Berlin rather than the British sector as had previously been assumed. As from 1947, when the Iron Curtain came down, to 1989, when the Berlin Wall came down, inquiries by the curious were vigorously discovered. But as to the disappearance of little Miriam there are no clues despite massive media coverage and extensive police inquiries. But Irving still wishes to discover what he can about the Fair which still visits Barking every year; the ownership of the Fair has changed but some of the original personnel remain, particularly the ancient and malicious Hungarian Romany Bela Horvathly, and some of his descendants continue to participate in the Fair’s events as do the strange so-called Siamese twins, referred to as Ping and Pong, part of the original ‘freak show’, who pop up from time to time like hobgoblins in a Christmas panto.

So, Lee and Mumtaz escort Irving to Berlin to find that the house where Irving’s father and mother first met and there they discover that the house is still there and occupied by the son of the former occupant. Further enquiries lead them into the violent history of Berlin under the Nazis and during the post-War chaos and later when under the iron grip of the totalitarian East German regime and the Stasi (the secret police) and also into Hungary’s role of collaboration and resistance during the War and to the failed Uprising in 1956. Another complication is the relationship between Lee and Mumtaz, consummated only once, to which Mumtaz’s strict Muslim principles are an insurmountable bar. Not to mention the hounding of Mumtaz and her beloved step-daughter Shazia by the family of Mumtaz’s murdered husband who demand recompense, financial and otherwise.

Another important theme is the role of women as child bearers illustrated both by Irving’s mother’s grief at the abduction of little Miriam and the anger of some Muslim men at their wives’ inability to bear children.

As usual with this writer a complex and multi-stranded plot come together in a convincing and satisfying resolution, while the narrative is brought to life by a gallery of lively and credible characters. It moves along at a smart and lively pace without at any point failing to maintain interest. Much recommended.
------
Reviewer: Radmila May