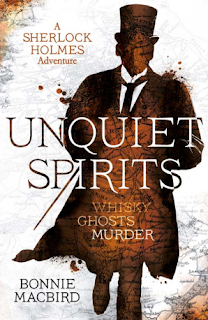 Late one December afternoon towards the end of the nineteenth century Sherlock Holmes and Dr John Watson, Mary Watson being briefly absent from home, are seated in the living room of the former's Baker Street apartment, when they receive a visit from a beautiful young married woman, Mrs Isla McLaren, of a leading Scotch whisky distillery family. She is seeking the help of Holmes in tracing a young woman servant, Fiona Paisley, who, having disappeared once and been found, bound and gagged with her lovely red hair cut off down to the scalp, has disappeared again. Holmes rejects Isla's call for help in a manner which, even for him, is particularly offhand. Holmes is also ignoring the fact that he has just been shot at in his apartment by someone in the street outside. In fact, that someone is Orville St John, an adversary of Holmes since their days at Camford University long ago. However, St John himself cannot provide an explanation for his action because his tongue has been cut out. That matter Holmes leaves in the not very capable hands of Inspector Lestrade of the London Police. He has been mandated by his brother Mycroft to go to the South of France where the precious vine crop is being devastated by the deadly pest phylloxera and the whole of France's wine output is threatened, not to mention that of other countries. This has now developed a political aspect and certain elements of the French establishment are accusing Britain of engineering the whole disaster to promote Scotch whisky which has recently become highly fashionable. Scottish distilleries are certainly doing their best to fill the gap and the house of McLaren is at the forefront. The whole McLaren family has arrived in the South of France: Sir Robert McLaren, Laird of Braedern (the family estate), his two sons, Charles, the elder, and his wife Catherine, and Alasdair whose wife is none other than the beautiful Isla.

The laird asks Holmes and Watson to dinner; there is a strong undercurrent of hostility towards Holmes but none are prepared for the ghastly denouement when a box containing what is supposed to be an ice cream bombe for desert is opened and is found to contain the frozen head of the missing Fiona! Holmes and Watson are briefly arrested but then released and Holmes is retained by Sir Robert to solve various mysteries concerning the family such as the mysterious death of Sir Robert's wife, the unexplained disappearance of his infant daughter Anne, and the disappearance of the son of one of Sir Robert's most faithful servants who had been in love with Fiona, and any number of strange events. Pausing only to deflect an attack on Dr Paul-Edouard Janvier, a scientist who has been investigating the causes of phylloxera, Holmes and Watson hie them to Braedern and eventually the keen and logical intelligence of Holmes, with input from Watson's calm commonsense and Isla's sharp intelligence (even Holmes in the end admits that she is intelligent), solve the mysteries.

This is an enormously enjoyable addition to the Holmes canon in which one extraordinary event succeeds another rather in the manner of the most macabre and melodramatic plots of Jacobean revenge tragedies of the baroque period. Recommended.
------
Reviewer: Radmila May

Bonnie MacBird was born 5 November 1951 in San Francisco USA. She is a produced screenwriter (TRON) and playwright (many plays and musicals) as well as an accomplished stage actor and writing teacher (UCLA Extension). She holds degrees from Stanford in music and film, and when she’s not writing Sherlock Holmes, moonlights as a theatre director and audiobook reader. A long career in Hollywood include stints as a feature film development executive, and multiple Emmy winning producer. Bonnie is a member of the London Sherlock Holmes Society and was recently invested as a member of The Baker Street Irregulars and The Adventuresses of Sherlock Holmes. She divides her time between Los Angeles and London where she is hard at work on a sequel to Art In The Blood and Unquiet Spirits titled Devil’s Due.
www.macbird.com.