‘Chord of Evil’ by Sarah Rayne 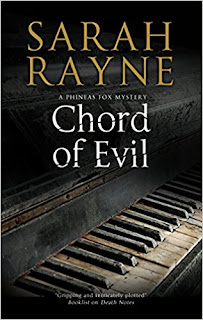 We first met Phineas Fox, a professional music researcher, in Death Notes.  At that time he had just moved into a new apartment that had rather stretched him financially, and become aware of his upstairs neighbour Toby who had a penchant for noisy parties, although he seemed a pleasant enough guy, who sensibly always invited Phineas to his parties, thus establishing a reasonable relationship.  It was at one of these parties, that as usual Phineas hadn’t wanted to attend but now found himself enjoying, that Toby collared him and said, ‘I’m concerned about my cousin Arabella’. She hasn’t turned up. Reading the note from her telling Toby that she would definitely be at the party had Toby worried. Phineas agreed to accompany Toby to her flat. Most probably it was the line in the note “I am intrigued to meet your new neighbour, the one with the silver eyes and look of remote and intellectual sexiness” that clinched it.

Whilst no sign of Arabella is found the sight of a portrait (ca 1940’s) of Christa Klein - an alleged murderess, and the sister of their godfather Stephen Cain  - has Toby worried, particularly when they find a note that refers to the once beloved portrait in less than complimentary terms.  Close scrutiny of the portrait reveals a piece of music which intrigues Phin, and so starts them on a journey that takes them back to the days prior and during the second World War.

The story has several third person narrators, Phin as they search for Arabella, Margot Mander, born into a family with great hatred for Christa Klein, Giselle Klein, mother of Christa, whose story takes us back to 1939, and then Christa’s story in 1941.

As Phin seeks to uncover the secret of a piece of music the origins of it are slowly revealed through the stories of Giselle and Christa.

To say I enjoyed this book is a vast understatement, I loved it. Mysteries where the solution is found by unlocking secrets in the past always fascinate me.  This is one of the best. A real page turner. Highly recommended.
-----
Reviewer: Lizzie Sirett

Sarah Rayne's first novel was published in 1982, and for several years she juggled writing books with working in property, pounding an elderly typewriter into the small hours in order to meet deadlines.  Much of the inspiration for her dark psychological thrillers comes from the histories and atmospheres of old buildings, a fact that is strongly apparent in many of her settings - Mortmain House in A Dark Dividing, Twygrist Mill in Spider Light, and the Tarleton Theatre in Ghost Song. She has written more than 25 books to date, and her work has met with considerable acclaim. Her books are also published in America, as well as having been translated into German, Dutch, Russian and Turkish.  In 2011, she published the first of a series of ghost-themed books, featuring the Oxford don, Michael Flint, and the antiques dealer, Nell West, who made their debut in Property of a Lady. Several years ago Sarah also wrote six contemporary horror books, originally under the pen-name of Frances Gordon .