‘One Damn Thing After Another’ by Dan Latus 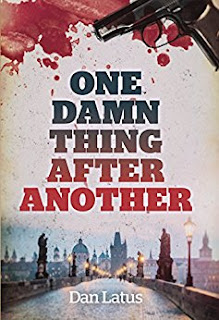 PI Frank Doy steps out of his holiday hotel in Prague and straight into a street fight ... where he saves Leon Podolsky, a wealthy Russian businessman, from being abducted. When Leon asks him to become his security consultant, Frank finds he’s taken on the Kremlin ...

This book is well named – the short chapters move the book on swiftly, and the characters barely have time to pause for a drink before the action hits again. The story’s narrated by Frank Doy, a likeable character with a wry, self-aware voice which adds humour, and he’s surrounded by an interesting cast: the likeable but ruthless Leon and his two sisters, Lenka, the fighter, and Olga, the homemaker, along with Leon’s efficient right-hand woman, Martha. The opposition boasts an array of thugs, gun-toters and other operators, who spend the book shooting, ambushing, exploding, and generally creating mayhem. From Prague the action moves to superyachts and exclusive restaurants in Montenegro, a restoration job on an historic house in England, and then back to Prague. There’s also the fun – since Leon is super-rich – of transport problems being solved by sending for a limousine, private helicopter or exclusive jet. In short, the action is fast, the dialogue snappy, and the plot constantly twisting.

A cracking non-stop adventure story, with a likeable hero, a good range of characters and an unexpected end twist.
------
Reviewer: Marsali Taylor

Dan Latus is the pseudonym of Ian Bullock. He grew up in Teesside. His novels are inspired by the places he knows best. And Then You're Dead, like Run for Home before it, is set partly in Northumberland and partly in Central Europe, a region he frequently visits and one where he has lived and worked.Of his other novels, Out of the Night, A Death at South Gare and Living Dangerously are all set in Cleveland and Teesside, where he grew up and lived until he moved for a time to Canada. Now, though, he lives in Northumberland with his wife.