‘An Oxford Scandal’ by Norman Russell 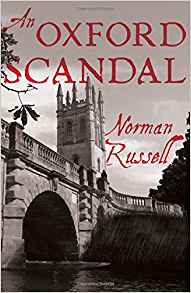 The atmosphere of Oxford at the end of the Nineteenth century is beautifully shown.  It is fascinating to picture Oxford with horse drawn trams and cabs going down the High Street.  The story concerns Anthony Jardine, a tutor at St Gabriel’s College, who has become estranged from his wife Dora and has taken a mistress, Rachel.  Anthony and Rachel, who is married to a very reclusive academic, can only meet occasionally -  they have apparently chance meetings in a tea shop or occasional days together in a rented house.  Dara behaves in increasingly erratic ways and is eventually revealed as a cocaine addict - this she kept secret from her husband, her best friend and her servants.

The discovery of Dora’s body in a tramcar in Cowley is followed by the murder of Rachel and, not surprisingly, Anthony is suspected of both deaths.  The police detection is led by Inspector James Antrobus and his doughty sergeant Joe Maxwell with some timely assistance from Dr. Sophia Jex-Blake.  This is the real-life woman who became a doctor against enormous odds.

In time honoured fashion these deaths prove to have their roots in the past.   The story of these crimes is interrupted by the discovery of some bones, allegedly those of Thomas a Becket, in a hidden vault at the College and there is a great controversy over what to do with these bones.  Should they go to the care of the Anglican or the Roman Catholic Church?

The story flows along most satisfactorily giving a picture of Oxford, the past-times of some undergraduates, the fetid, smoky atmosphere of the Borough area of London and the lifestyle of the dons in their Colleges.  The mystery is solved in a dramatic climactic scene.
------
Reviewer: Jennifer S. Palmer
This is the third book in Norman Russell’s Oxford series and he has written widely on other topics.

Norman Russell was born in Whitson, Lancashire, but has lived most of his life in Liverpool.  After graduating from Jesus College, Oxford, where he studied English, he served in the army in the Bahamas and Jamaica.  He returned to Oxford to study for a diploma in education and later was awarded the degree of Doctor of Philosophy from the University of London.  He now writes full time.