‘Kill the Father’ by Sandrone Dazieri 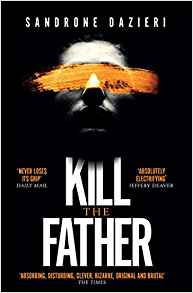 The wife and child of Stefano Dazieri disappear during a picnic. The wife is quickly found nearby, dead, but where is the little boy, Luca? Is he also dead, or is he being kept alive, and if so, why, and by whom? The senior police officer leading the investigation, Alfredo Rovere, chief of Rome Police's Mobile Squad, calls in police officer Columba Caselli. But Columba, who has been on prolonged sick leave, mentally traumatised after a bomb attack in Paris in which many people died as a result of decisions taken by her for which she feels responsible, is reluctant to be involved. But Rovere is insistent: Columba is, he tells her, the right person; and in any case, she will be acting semi-officially. Rovere wants Columba to be assisted by Dante Torre, who, as a child, was abducted in similar circumstances and kept imprisoned in terrible conditions for eleven years. When eventually freed he was so affected by his experiences that he is incapable of normal life and shuns most human contact, but Rovere believes that those experiences will have given him special insights and he insists that Columba work with Dante. Somewhat warily, she agrees. Their search at first seems hopeless and Luca's father is arrested as the most likely suspect, while Columba and Dante are obstructed at every turn  by Franco de Angelis, the investigating magistrate who, under Italian law, is responsible for supervising the police inquiry into the murder and kidnapping, and also by Marco Santini, Deputy Chief of the Violent Crime Analysis Unit of the Italian Investigation Service, neither of whom welcome Columba's and Dante's involvement. Columba and Dante press on with fairly unofficial assistance from some of their colleagues and uncover an enormous conspiracy of immense complexity involving the disappearance of many young boys over the years and considerable peril for Columba and Dante and fatal results for some of those helping them.

This book, which is intended to be the first of a series featuring Columba and Dante, provides an interesting insight into how a serious crime is investigated in a country with a different justice system to our own and a plethora of criminal justice agencies co-operation between which is often half-hearted, not to say sometimes deliberately obstructive. We also enter some of the most dangerous and deprived areas of Rome, a far cry from the spectacular tourist areas known to so many visitors to the Italian capital.
------
Reviewer: Radmila May

Sandrone Dazieri was born 4 November1964 in Cremona, Italy. He graduated at San Pellegrino Terme hotel-management school and worked as a cook for years, all around Italy. In 1999 he achieved his first popular success with the thriller Attenti al gorilla (Watch Out For The Gorilla), the first in a best-seller series, where the main character is a sort of doppelgènger of Dazieri himself, living the nightlife in Milan with all the ensuing troubles. Dazieri's books are renowned for the rocambolesque adventures in which Sandrone (the main character has the author's name too) is continuously involved, in an irrefrenable but never fatalistic destiny. It is in fact Sandrone's personality that always drives him to assist the weak and derelict, those who have lost all hope for help but for the Gorilla's saving hand. He is now the bestselling author of fourteen novels and more than fifty screenplays. Kill the Father, the first in a planned series featuring Colomba Caselli and Dante Torre.