‘The Case of the Curious Cook’ by Cathy Ace 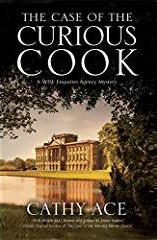 The discovery of a leak in the bedchamber of Henry Devereaux Twyst, eighteenth Duke of Chellingworth assumes disastrous proportions when it is found that some priceless books in the lower library have been water damaged. But tragedy is averted when book restorer Bryn Jenkins announces that patience, experience and a bit of money should see everything returned to good order.  After a bit of feet shuffling he goes on to say that he usually does the work at his own shop the Crooks and Cooks bookshop which he runs with his daughter Val, local TV celebrity chef, The Curious Cook.  However, these books are priceless and he doesn’t think that he can afford the insurance, also he adds, there are ‘some sort of strange shenanigans going on there at the moment’.  With 268 rooms Henry is confident that he can find somewhere for Bryn to work

That settled, Henry’s mother, the Dowager Duchess Althea, catches up with Bryn and with eyes twinkling in anticipation quizzes him about the ‘strange shenanigans’.  I do not propose to enlighten you readers as to the manner of the ‘strange Shenanigans’, but they are indeed ‘strange’.  And Althea is certain that they are a case for the ladies of the WISE enquiries agency, of which she is a partner.

Initially the WISE women are not sure that this is a case for them, and they do have several cases they are currently dealing with, but when they get caught up in the discovery of some work that maybe by a famous local artist, who was murdered by her own brother, in trying to ascertain if the work is genuine they find what could be a connection to the ‘strange shenanigans’.

I greatly enjoyed this book; in method, it was reminiscent of the works by the late Hazel Holt.  It was often chance overheard conversations that pointed investigator Mrs Mallory in the right direction and so it is with this puzzle.  When one of the members of the WISE agency goes undercover and then missing things take a sinister turn.

Are the two cases linked? And exactly what part does a nearby old folks home play? With some marvellous characters and an intriguing plot, this book is highly recommended.
------
Reviewer: Lizzie Sirett