‘One Little Mistake’ by Emma Curtis 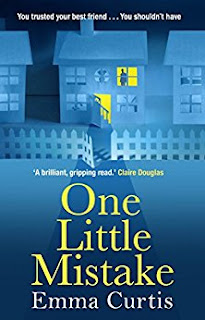 Vicky Seagrave had everything: a great husband, three lovely children, a nice house in Clapham, and a good job as a teacher. She was the classic yummy mummy. So, why do things go so disastrously wrong? To begin with, she almost, but doesn’t quite have sex with David, the father of one of the pupils at her school. Then she leaves her small baby son Josh for a short period to look at another house to which she’s taken a fancy and then, when she comes home and finds an opportunistic burglar with her son, she drops Josh so that he possibly breaks his arm. Then she lets her best friend, estate agent Amber Collins who had been showing her round the house, talk her into spinning a story which is effectively a lie: that she had been in the house all the time but hadn’t realised there was a burglar until she went upstairs and found him with Josh. The hospital informs the police who question Vicky; by now, having read media reports of cases where children who have been left by their parents, even if only for a short time, are taken into care, she persists in the lie. And this is where the friendship with Amber begins to demonstrate that it is essentially hollow. The reader knows, although Vicky does not, that Amber is jealous of Vicky, of her husband with a good job, that she lives in a nice house whereas all that Amber and her husband, the amiable but ineffective Robert, can afford is a rented flat with noisy students as fellow-lessees, and that Vicky has three children whereas Amber has only one, although Amber desperately wants another. Amber has already wormed out of Vicky an admission that she had almost started an affair with someone. Now when she tells Vicky and Tom that she and Robert are interested in the house that Vicky would like to buy, Vicky feels obliged to say she has no further interest. Then Amber asks for money towards the deposit. Vicky refuses but Amber asks again. And again. And social services become involved. Worse still, if the police discover that Vicky has been lying to them, she herself will be in serious trouble. And if Tom finds out about David, who keeps sending Vicky texts, so will their marriage. And Amber thinks that Tom would be a distinct improvement on Robert.

As things get more and more disastrous for Vicky the suspense in this skilfully written story rises to a heart-stopping finale. Interwoven with one narrative which moves between Vicky floundering in the morass and Amber’s growing resentment of and anger with Vicky there is another one from some years before, that of Katya whose mother has died of an overdose and is now in the care of social services. She loves Maggie, her social worker and longs to be adopted by her so that her daughter Emily will be Katya’s Forever Friend, but instead Maggie arranges for her to be adopted by Sally and Luke. Both Sally and Luke should be good parents; but the problem is that Luke is rather too affectionate. Ominously so.

An excellent psychological suspense novel which stands above many others in this crowded field. Highly recommended.
------
Reviewer: Radmila May

Emma Curtis was born in Brighton and brought up in London. Her fascination with the darker side of domestic life inspired her to write One Little Mistake, her first psychological suspense. She has two children and lives in Richmond with her husband.
Find her on Twitter: @emmacurtisbooks