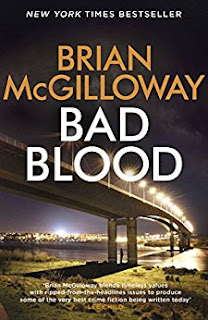 Londonderry, Northern Ireland, the week before the vote of the European referendum on June 23, 2016. The national debate which had begun somewhat flaccidly has suddenly become extremely heated with passions running high among those in favour of leaving (Brexit) and those in favour of remaining. In Northern Ireland those passions are further inflamed by the age-long hostility between the Unionists and the Republicans. In a hall in Londonderry Pastor Nixon is inveighing against homosexuality particularly gay marriage, legal in both the mainland U.K. and the Republic of Ireland, but anathema to hard-line Protestant Unionists. He lauds a newspaper report of an instance in an African country of two gay men being stoned to death. But gay marriage is not the only inflammatory issue in the referendum campaign: anti-immigrant feeling in mainland Britain and the North is being stoked ferociously. Detective Sergeant Lucy Black is called to one Romanian family who have been the target of graffiti and offensive leaflets. Lucy enquires at the leaflet printers who claim to have no idea who ordered the leaflets; however, the proof of the leaflet has a barely legible signature which leads them to Jackie Moss, a local café owner, who has served four life sentences for sectarian murders but now describes himself as a community activist. And Moss identifies the signature as being that of Charles Dougan who runs a local taxi firm; he claims to know nothing about the leaflets. Meanwhile there is a more serious event: a young gay man is found murdered. He is identified as Marty Givens who was present at a Gay Pride celebration at a local night spot. Eventually the police find that there is possibly a link between anti-immigrant prejudice and anti-gay prejudice but is there something else, a link between someone in the police force and a shadowy Unionist association calling itself Ulster Force? And at the same time, although Lucy is not at present in a relationship, there is still the problem of her relationship with her mother Assistant Police Commissioner Jane Wilson. And her sadness for her father who is in a nursing home with Alzheimer’s.

This fourth in the writer’s Lucy Black series and is a worthy follow-up to the earlier titles. I particularly appreciated the way in which the plot is connected to recent political events. Recommended.
------
Reviewer: Radmila May

Brian McGilloway was born in Derry, Northern Ireland in 1974. After studying English at Queen’s University, Belfast, he took up a teaching position in St Columb’s College in Derry, where he is currently Head of English. He lives near the Borderlands, with his wife and their four children.
http://www.brianmcgilloway.com