‘The Body in the Ice’ by A J MacKenzie 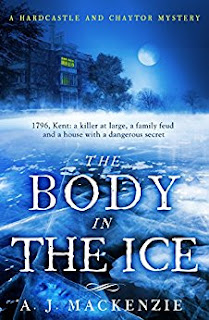 I really enjoyed this novel. I’d not read anything by this husband-and-wife author team previously; I intend to remedy that.

It was a pleasure reading a crime novel that had almost everything; authentic and fascinating characters, a clear writing style that carried me along, a strong plot with a credible and extremely satisfying climax and resolution and a superbly evoked setting of time and place.

Romney Marsh in the late eighteenth century comes off the page with the action deeply rooted in the landscape and the people and politics of the area. Wider politics were explored too; the American War of Independence was only just over and played an important part in the plot, as did the French Revolution and subsequent war still raging just 30 miles across the water and bringing with it a constant threat of both covert and overt invasion.

The season in which the story took place, an exceptionally hard winter out on the bleak and exposed marshes by the sea, added to the atmosphere and was used to good effect. Reading this in a heatwave had a deliciously cooling effect!

The storyline concerned a family who lived in the locality and have now returned from America, and their home, New Hall, is at the centre of shenanigans which make comments about differing attitudes to race and slavery, smuggling and espionage. Perhaps, if we’re being picky, the author made the views of the main protagonists a little too in tune with those of modern readers, and perhaps there were some clichéd or too obviously hateful attitudes ascribed to the villains, but for this reader these foibles made the novel even more readable and, frankly, more fun.

I found all the characters believable and nicely drawn – especially Rev Hardcastle, the local magistrate, a tolerant man of conscience and consideration, from whose viewpoint much of the story is shown. His accomplice in crime-solving, Mrs Amelia Chaytor, is a wise yet troubled woman in whose company I felt privileged to be, and as light relief we have the reverend’s effusive, full-of-herself sister Calpurnia, and her rather lovely dog, Rodolpho. (A scaredy-cat of an Irish wolfhound, named after a character in one of Calpurnia’s own romantic suspense novels that she can’t resist rabbiting on about whether people are interested or not!)

The pace was sustained beautifully and was always sufficient to ensure a hasty return to its pages and, in the last chapters, to keep the book firmly in my hands.

It was also a pleasure to read a book that had been copy-edited to high standards, for a change. No comma splices and run-on sentences, no misplaced capitals or errant apostrophes here. Congratulations to the publisher and to the talented authors, Marilyn Livingstone and Morgen Witzel, whose work I have been very pleased to discover.
------
Reviewer: by Dea Parkin

A J Mackenzie is the pseudonym of Marilyn Livingstone and Morgen Witzel, an Anglo-Canadian husband-and-wife team of writers and historians. The Body on the Doorstep was their first foray into fiction and was published by BonnierZaffre in April 2017. The 2nd instalment of the Hardcastle & Chaytor Mysteries, The Body in The Ice their second book was published 20th April. For a full bio of Marilyn and Morgen see