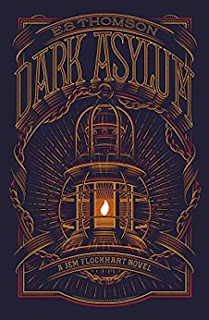 This is the second murder mystery involving Jem Flockhart and Will Quartermaine and the two companions now share lodgings above Jem’s apothecary in Fishbait Lane, London.  Both are pleased to have left their previous residence in the grounds of St Saviour’s Infirmary where a grisly discovery in the hospital’s medieval chapel nearly cost Jem his life.  The Dark Asylum of the title is, in fact, the ironically named Angel Meadow Asylum which is being overseen by Dr Rutherford during the absence of Jem’s friend, Dr Hawkins.  Rutherford is obsessed with the discredited pseudoscientific pursuit of phrenology and his cruel regime within the asylum has been detrimental to the wellbeing of its patients and staff, most of whom are therefore delighted to welcome Dr Hawkins back to the facility.  The close-knit community are, however, taken by surprise when he unexpectedly introduces them to his new wife.  Coincidentally, the Hawkins’ homecoming party plays host to another of Jem’s old acquaintances, Dr Stiven, who is keen to show off another lady unfamiliar to the residents of St Saviour’s Parish, his young ward, Susan Chance.  Stiven is rehabilitating Susan from a criminal past that began several years ago in Prior’s Rents, a dilapidated slum near to the Dark Asylum itself.

The novel establishes a gloomy, gothic atmosphere from the outset, when a mutilated corpse is discovered complete with “phrenological callipers” protruding from its skull.  Jem, the cross-dressing apothecary-detective, born a woman but living as a man, narrates the story.  Carefully woven into Jem’s tale is another voice describing a dreadful and abusive past life.  Not until the final pages of the book is the identity of this character disclosed, and the juxtaposition of these narrative voices creates an intriguing plot that teases the reader to the end.  Thompson’s knowledge of medical and social history provides fascinating insights into mid-nineteenth century attitudes towards, and treatment of, people with mental illnesses.  Her intense descriptions of the foul conditions endured by the unfortunate poor in Victorian London give the reader as sense of just how odious life must have been.

Beloved Poison, promised to be the first of a series of enjoyable historical thrillers by E.S.Thomson and Dark Asylum more than lives up to the task.  A third novel is currently in the offing - I cannot wait!
------
Reviewer: Dorothy Marshall-Gent

E. S. Thomson was born in Ormskirk, Lancashire. She has a PhD in the history of medicine and works as a university lecturer in Edinburgh. She was shortlisted for the Saltire First Book Award, the Scottish Arts Council First Book Award and her first book for Constable, Beloved Poison, was shortlisted for the prestigious William McIlvanney Award in 2016. Elaine lives in Edinburgh with her two sons.