Bristol CrimeFest 2017
18-21 May
Report by Radmila May
This year’s Crimefest was held as usual in the Bristol Marriott Hotel on College Green in the centre of Bristol. More people than ever before attended and parallel events were held. Among the star speakers were: Ann Cleeves, author of the Vera Stanhope series and the Shetland series on which the TV series are based; Anthony Horowitz, author of a number of detective novels including the YA Alex Rider spy series and script writer of such TV series as Foyle’s Law and the Poirot stories; the celebrated crime writer Peter Lovesey; Agatha Christie cover designer and editor Tom Adams and John Curran, the Icelandic women crime writers Jonina Leosdottir, Solveig Palsdottir, Lilja Sigurdardottir and Yrsa Sigurdardottir. The Toastmaster was the critic Barry Forshaw.

Regrettably I was not able to attend all these special events but this account of the Festival will cover such of the events which I could, in particular, the daily Fresh Blood events which featured debut authors.

The panel was moderated by Karen Robinson, director of the monthly The Times/ Sunday Times Crime Club. Participating authors were: Steph Broadribb (Deep Down Dead, Florida bounty hunter Lori Anderson who has her own murky past); David Coubrough (Half a Pound of Tuppenny Rice, investigation of two deaths on a long-ago Cornish family holiday); Mary Torjussen (Gone Without a Trace, a young woman’s boyfriend
disappears and she herself is being watched); Lucy V Hay (The Other Twin, a young woman investigates her sister’s death).
Panel (left to right): Mary Torjussen, Steph Broadribb, David Coubrough, Lucy V Hay, Karen Robinson (moderator) 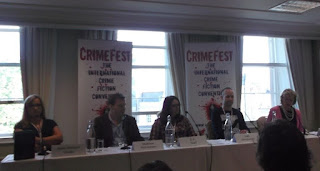 
Traditional Mysteries – How Cosy Can Murder Be? (Thursday) 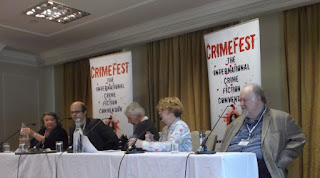 This panel was moderated by the well-known writer
Andrew Taylor whose books are set in both the recent and not-so recent past (latest novel, The Ashes of London). The authors were Cathy Ace (two series, one set in Wales, the other featuring a Welsh-Canadian criminal psychologist, and short stories); R.M. Cartmel (two series, one set among the Burgundian vineyards, the other, rather darker, set in Peterborough); Ruth Dudley Edwards (historian, also a series featuring the extremely non-politically correct Baroness Troutbeck); Hans Olav Lahlum (sponsored by the Norwegian Embassy, his K2 and Patricia series is set in Oslo 1968-73).
Andrew Taylor initiated a discussion about what ‘traditional/cosy’ means. For Cathy Ace traditional stories have a puzzle plot, fair play, red herrings; southern U.S. states prefer lighter mysteries and comedies. In R.M. Cartmel's Burgundian stories, the murder takes place off-stage, location is important, unlike French crime fiction where conflict is often explicitly brutal. When Ruth Dudley Edwards was growing up in Ireland there was no tradition of home-grown crime fiction; she does not see herself as a cosy crime writer but rather as a satirical writer taking on such subjects as political correctness. Hans Olav Lahlum writes classical who-dunnit crime stories which have been compared to Simenon, Agatha Christie, and Conan Doyle and avoids gun battles and massacres.
Panel (left to right): Cathy Ace, Hans Olav Lahlum, Andrew Taylor (moderator), Ruth Dudley Edwards, R.M.Cartmel
The Hunter Hunted: Running for Your Life (Thursday) 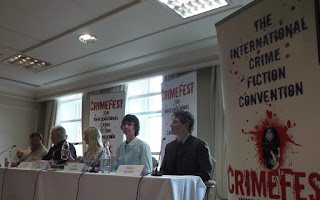 This panel discussed creating breath-taking
suspense in thrillers. The moderator was L.A.  (Louise) Larkin who is well-known for taking research to extremes for her thrillers, mostly standalones but now starting a series set in
Antarctica, including time spent there, attending a hackers’ convention, and learning to sew up a wound. The other panellists were: Swedish screenwriter Stefan Ahnhem who had never wanted, he said, to be a writer but had always had a vivid imagination; Felix Francis, son of the famous writer Dick Francis; former policeman and journalist Paul Finch has written six titles featuring maverick cop DS Mark Heckenburg; and award-winning Finnish writer Anti Tuomainen who has written six crime novels two of whose novels are in development for feature films. Paul Finch who includes The Bill among his credits stressed the need to keep novels fast-paced. In Felix Francis’s childhood discussion was always about criminal matters; although his novels are primarily about people they, like his father’s, have a horse-racing background. Anti Tuomainen’s stress the importance of weather especially in Finland. Stefan Ahnhem asked why it was that it was mostly female characters who were the hunted. All the writers agreed that often the characters took over the plot.
Panel (left to right): Felix Francis, Paul Finch, L.A. Larkin (moderator), Anti Tuomainem, Stefan Ahnhem.


The moderator was Julia Crouch (latest novel, Her Husband’s Lover) who invented the term ‘domestic noir’ (the genre is also known as psychological suspense and ‘grip-lit’). The participants were: Mary Torjussen (her novel is Gone Without a Trace, see Fresh Blood Friday above); Jane Corry (Blood Sister - one sunny May morning three little girls set off for school, one is murdered); Michael J Malone (Scottish writer, A Suitable Lie - male protagonist); and Lisa Hall (Girl Disappeared - a marriage is turned upside down when the wife vanishes). A question asked afterwards was ‘Why the boom in psychological suspense’? Apparently the University of East Anglia will be publishing a book on the genre; one answer put forward is that the domestic setting is realistic and relevant to women’s lives.

War Crimes: Crime Fiction in a Time of Strife

This panel was moderated by eco-thriller writer Paul E. Hardisty who has published three novels whose protagonist, action man Claymore Straker, goes on his own journey to an increasing awareness of the way in which commercial exploitation of the environment results in irreparable damage to the natural world and all-too bloody civil conflict. Other participants were: former journalist Stephen Davis who has begun a new series with The Tsar’s Daughter featuring the fortunes of Philip Cummings and his family; Nuala Ellwood comes from a family of journalists, who grew up while the wars in the former Yugoslavia were occurring and whose protagonist in her debut novel My Sister’s Bones is a war reporter is haunted by what she has seen; Chris Petit is both writer and filmmaker whose novels include Robinson and The Psalm Killer while his thriller The Butchers of Berlin, chosen as book of the year by the New Statesman, is followed by a sequel later this year; Robert Wilson’s 14 crime novels – four West African noir, four psychological suspense novels set in Seville, and four international thrillers featuring kidnap consultant Charles Boxer; his next novel is  Hear No Lies. In the following discussion Paul Hardisty stated that war crimes are at the extreme of wrongdoing. Nuala Ellwood had been influenced by her father’s experiences as a war reporter; she was especially interested in women war reporters and she felt that current fears are emerging in crime fiction. As a young man Robert Wilson had driven from the UK to Nepal and while doing so had recalled his father’s wartime experiences and tried to personalise them in his writing. Stephen Davis included ‘gallows humour’ in his writing but also referred to the way in which governments can collude in war crimes. Chris Petit is interested in the secret histories behind conflict: ‘bravery’ he quoted, ‘is to be afraid of not being afraid’. All five writers felt that crime fiction is maturing and growing more literary.