Lesley Cookman had a varied early career, including being an air stewardess, model and disc jockey. She achieved an MA in Creative Writing from the University of Wales, taught writing for both Kent Adult Education and the WEA and edited the first Sexy Shorts collection of short stories from Accent Press in aid of the Breast Cancer Campaign. Lesley is best known for her long-running Libby Sarjeant series and her more recent The Alexandrians series, both of which have a theatrical background. Lesley has also written short stories and pantomimes and has published How to Write a Pantomime, with a foreword by Roy Hudd.

Carol:   I read in your blog that the character of Libby Sarjeant came to you one day while you were driving through Kent. Libby is a character that many of us feel we know very well. I am sure Libby’s life and relationships have developed over the years but how much of her life and character came to you in that first flash of insight?
Lesley:  I don’t think much did – it was a bit like meeting someone at a party – I could see what she looked like and the type of person she was, but it didn’t go any further than that.

Carol: Your love of the stage is clear and it is a fundamental part of Libby’s life. Did you have to do a lot of research to keep her theatre experiences so authentic or was it already at your fingertips?
Lesley: Sadly, I’m a theatre nerd. I’ve been involved since I was a child. My first professional performance was at the age of 15 in London. We have a lovely little Victorian theatre in our town and I’ve been performing and directing there for over 30 years. I have also written for the stage and have a deep love of pantomime and Music Hall.

Carol: Did the idea of Libby’s partner in detection, Fran, having psychic abilities come to you at the same time you discovered Libby?
Lesley: Not quite. She arrived separately while I was on holiday in Somerset, and I have no idea where she sprang from! I was toying with writing a book about her (and theatre, naturally) but along with Libby at the time, she got shelved.

Carol: You have created a wonderful community around Libby, with many friends and family reappearing. How do you keep them all straight in your mind?
Lesley: I know the core characters as well as I know my own family, and it’s one of the reasons I have a cast of characters in the front of the books, along with the map. I have all the books stored on the computer, so when I have to look up a minor character making a second or subsequent appearance, I can look them up straight away.

Carol: When you started the Libby Sarjeant books did you think that they would turn into a long-running series and is there anything you would have done differently if you had realised this?
Lesley: Hazel Cushion of Accent and I both approached the whole thing as an experiment. She asked if the first (unfinished) book could be the start of a series and I said yes. I don’t think I’d have done anything differently.

Carol: Your new series The Alexandrians again has a theatrical background but is set in Edwardian times. Where did the inspiration for this series come from?
Lesley: My previously mentioned love of Music Hall. Years ago, when I was editor of the British Music Hall Society’s magazine, the society’s archivist suggested I wrote a “Music Hall Musical” using old songs. I did so (still available for performance!) and then used it as back story in the third Libby book. Then I used the back story, somewhat expanded, as the first Alexandrians book.

Carol: Did you have to do a lot of research to get the period details accurate for this time?
Lesley: Luckily, I already knew rather a lot! (See previous answer) However, I did quite a lot more reading, mainly because I love it.

Carol: Tell us a bit about your book on writing pantomimes. Where did this interest come from and is it as much fun as you make it look?
Lesley: Again, a lot of this came from experience. I can’t remember how many I’d actually written myself at the time I was commissioned to write the book, but luckily the job as editor of the BMHS magazine brought me into contact with a lot of industry professionals who gave me a lot of help. Roy Hudd, bless him, wrote the foreword. And yes, it can be huge fun, but it’s incredibly hard work. Don’t underestimate it!

Carol: You have also written romance novels under your pseudonym Rosina Lesley, do you find it easy to walk a romantic path or does the desire to slip in a nicely convoluted murder ever overwhelm you?

Lesley:  Those books were written back in the eighties when I was convinced I could “write a Mills and Boon” like so many deluded writers. No, you can’t. It is a skill, and I have the greatest admiration for all my friends who do write them, or who, like my very good mates, Katie Fforde, Christina Jones and Jill Mansell, have gone beyond the category romance so successfully. I am not a romantic soul.

Carol:   You’ve met a lot of big name comedians over the years, have you got any reminiscences of them that you’d like to share?
Lesley: Oh, golly! Some of them are too – er – rude to share, but one of the best was being taken in to dinner by Norman Wisdom, who, as we paraded arm-in-arm across the ballroom floor to the top table, did his characteristic trip and brought the house – and me – down.

Carol: Tell us about your hobbies and the things you like to get up to in your spare time.
Lesley: I don’t actually have any hobbies except reading. I’ve developed an interest in my garden in the last ten years, but someone else does it! I go and see my four children perform if I’m able to and when I can afford it, I go on holiday to a tiny village in Turkey where I have friends. And, as Victoria Wood’s Kitty would say, “That’s me for you!”

There are 18 books in the Libby Sarjeant series


Her most recent series is the Alexandrians

To learn more about Lesley Cookson visit her web site at: 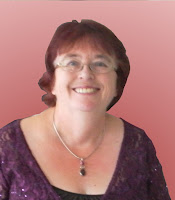