‘Under the Harrow’ by Flynn Berry 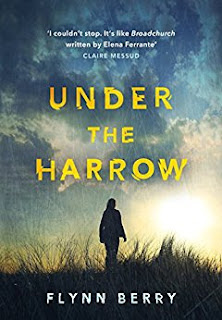 Nora, an aspiring author, boards a train at London’s Paddington Station, bound for the village of Winshaw in Oxfordshire to visit her sister Rachel.  During the journey, Nora reminisces about their recent holiday in Polperro, Cornwall, and looks forward to the weekend they will spend together.  Her musings suggest that the siblings share a warm, intimate and honest relationship.

A fairly unremarkable opening to the book, one might think, but the first chapter began on a more sinister note with a brief paragraph about a woman in the East Riding of Yorkshire who has gone missing and the report’s possible, but as yet unexplained, impact on Rachel. This snippet of information is almost lost in Nora’s train-ride meditations, but its chill, dark fog infiltrates the text and prefigures the dreadful moment when, at her journey’s end, Nora finds Rachel’s murdered corpse.

Under the Harrow is the perfect title for a novel with a vicious beginning that consequently triggers psychological and emotional anguish.  Rachel’s barbarous and bloody murder is literally harrowing.  The investigation into her death proceeds to devastate those who loved and knew her, as their lives are disrupted,dissected and exposed to scrutiny.  Nora’s first person narration encourages the reader to share, andempathise with, the shock, disbelief and growing anger she experiences after she makes her gruesomediscovery.  Gradually, however, the search for Rachel’s killer reveals the complexity of the relationshipbetween the two sisters, and the storyteller’s temprament and veracity are frequently thrown into doubt.  The immediacy of the narrative is enhanced by the author’s skillful use of the present tense throughout much of the story. One is never quite sure who to believe, alibis are scrutinised and found wanting, and the book keeps the reader guessing until its unexpected and satisfying ending.

Flynn Berry is a graduate of the Michener Center and has been awarded a Yaddo residency. She graduated from Brown University. Under the Harrow is her first novel.