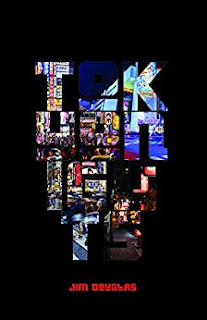 I wasn’t sure what to make of this at first. By the end, I was completely hooked – although I still wasn’t sure exactly what it was I was reading. Crime thriller, detective story, exploration of Japanese culture and of philosophy – it all melded together in what turned out to be a thoroughly good read.

It begins with Charlie Davis, a man without ties it seems, newly arrived and feeling free in Tokyo, before switching to the viewpoint of Colin McCann, a private detective, also in Tokyo and hard on Charlie’s heels. Why is McCann trying to find the younger man? In a series of flashbacks we’re taken to a Cheshire setting and introduced to the family and friends of Natasha Philips, a young rich girl found dead at an open air festival. In the flashbacks, McCann is interviewing them: he has been engaged by the dead girl’s father to find out the truth behind her death, ruled as misadventure. Charlie Davis had been seeing Natasha and her father had hated him on sight; McCann was asked to track him down. At this stage, I found the Tokyo sections alien and hard to like and, I have to say, imperfect copy-editing and occasional erroneous line breaks didn’t help. It was the North West interviews, more familiar both in traditional detective-novel content and in locale, that kept me involved. However, by the time the flashbacks stopped and the novel became rooted in Tokyo as McCann caught up with Charlie, I was enjoying the read.

The story for some time becomes a cat-and-mouse chase of the mind. McCann makes Charlie’s acquaintance and because of the cover the detective uses, they start spending time together even while McCann starts asking questions. Experiences in Tokyo flirt with the surreal and the novel’s writing style, melding philosophy with the story’s narrative, exerted a power that carried me along even as the action moves out of Tokyo to the Japanese wilderness after two truly shocking scenes that give the narrative fresh impetus, with McCann and Charlie both in serious trouble with the yakuza, organised crime gangs.

The language in many places was quite delicious, if sometimes overdone, and the descriptions brought places, a culture and a people vividly into focus. The two main characters were well drawn and while McCann’s adoption by a poorly treated dog back in England puts this reader, at least, firmly on his side, he wasn’t entirely sympathetic, which intrigued further. Occasional switches of viewpoint were largely handled well and I was rooting strongly not only for McCann but also for the more ambiguous character of Charlie. The two climaxes – nightmarish with regard to the Japanese story – were very satisfying.

After finishing the book I discovered it had been co-written by two authors and this explained a lot; I never lost the feeling that it was trying to be two quite different things and that the cultural and philosophy aspect had to work hard to function as an effective vehicle for the thriller aspect of the story. Yet I concluded that it did work, and it made Tokyo Nights an unusual and thought-provoking read.
------
Reviewer: Dea Parkin 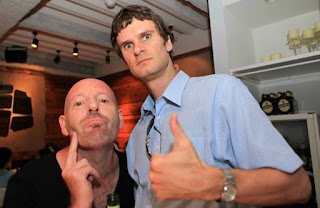 Jim Douglas is the pen name of two writers - Jim Hickey and Douglas Forrester.
Jim Hickey (see far left in photo) was raised around Dublin and bruised and blessed into a reluctant maturity by boxing trainers and Christian brothers. Back in England, he attempted gentler pursuits such as studying the visual arts, writing poetry in a cottage that bordered the Humber river and going academic by getting a degree in English literature in Worcester. He took a job as a manager of a nature reserve in Easington. He then took a teaching opportunity in the former Czechoslovakia. Before long he was in Australia, deep in the bush and living with an Aboriginal tribe called the Noongars, officially employed as their teacher. Things came to a halt when he docked in Tokyo. Something ran out and another thing came in. Tokyo Nights is a novel spun from his eventual captivity, minor enlightenment and spots of contentment in Japan.. He lives near enough and far enough from the metropolis and remains at pen on the second instalment of this book.

Douglas Forrester was born and raised in Glasgow. He studied law in both Scotland and Amsterdam and spent the mid-summer months working as a grouse beater in the Highlands. After completing university, he worked for the Royal Bank of Scotland as a financial advisor before setting off for an expected short-lived sojourn in Japan. He never returned to the bank nor to law and began to forge out a career of kinds at the now defunct NOVA, where he was Jim's boss, and then at an international school and several universities. During this time he became a fluent Japanese speaker. He was also an accomplished Shodo-Jaoanese calligraphy- practitioner and showed his work in a number of exhibitions as the only foreigner with work on display. He always had a keen interest in books and shared a passion for the work of Gavin Maxwell and R.L. Stevenson with his co-author. Their collaboration led to Tokyo Nights and is a cornucopia of their often very different experiences and impressions of Japan's capital city. Doug returned to Glasgow early in 2016 for medical treatment and to be with his family. He died in September 2016 shortly before the publication of this, his first novel.