‘The Women of Baker Street’ by Michelle Birkby 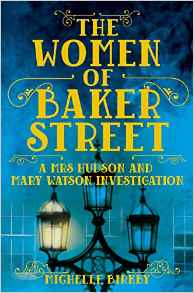 In this, the second Mrs Hudson (Sherlock Holmes’s housekeeper) and Mary Watson (wife to Holmes’s companion Dr John Watson) investigation, Martha Hudson is abruptly taken into hospital with a sudden illness which turns out to be an obstruction in the bowel, not a life-threatening tumour but painful and requiring an immediate operation. Thanks to her friendship with Mary and John Watson, Martha finds herself in a private ward in St Bartholomew’s Hospital with six other female patients. Martha wakes during the night and thinks she sees someone slip into the ward and smother one of the patients. In her drug-induced stupor she thinks the someone is Death and dares not move. And in the morning someone has indeed died but for the moment Martha thinks the vision of Death resulted from the anaesthetics she had been given. Bored at the prospect of several weeks of enforced idleness in hospital, Martha begins to observe her five fellow-patients while at the same time not admitting that she is housekeeper to the Great Detective Sherlock Holmes and her friend Mary is the wife of Holmes’s friend and fellow-investigator Dr Watson. Then a second patient dies: the Catholic Sarah Malone who had been delirious and on the verge of death for some time. In her last minutes she had been consoled by another patient, the fellow-Catholic enigmatic Miranda Logan to whom Sarah had murmured her last confession. Miranda, saying that she is bound by the seal of the confessional, refuses to say what Sarah’s sins were. Sarah’s death is undoubtedly natural but when a third death occurs Martha, again waking from heavy sleep, thinks that Death has come again, this time for the aged Emma Fordham. Emma had been a great beauty and had had many lovers but had never married and has kept all the secrets of her past. Now she is indeed dead and her bed empty. And Dr Watson has arranged for an early discharge for Martha and she, desperate to get back home, gladly bids farewell to the remaining three patients.

Once home, she finds that Mary is now thoroughly engrossed in a mystery with which Holmes has entrusted her. The mystery is that of the numerous missing street boys whose disappearance is unaccounted for. At the same time London’s streets are being haunted by the mysterious Pale Boys; many people, including the Baker Street Irregulars with the exception of their leader, the ever-sceptical Wiggins, think they are ghosts . . . but are they? And is there a link with the women in Martha’s ward some of whom have had sons who have disappeared? There are mysteries to be solved by the always-resourceful Martha and Mary. A further complication is the continuing story of what happened in the dramatic conclusion of the previous story in the series, The House at Baker Street (also reviewed in Mystery People); Inspector Lestrade is doggedly pursuing his enquiries which causes Martha much turmoil.

Quite apart from that continuing storyline, many of the characters in the previous story, some taken from the original Holmes stories, others created by the author, reappear in this one. It would probably be advisable for readers to begin with that story and then to go on to the next one. That said, this is equally enjoyable, both of them being well described by a reviewer as ‘a witty feminist take on the crime classic’. Recommended.
------
Reviewer: Radmila May

‘The House at Baker Street’ by Michelle Birkby 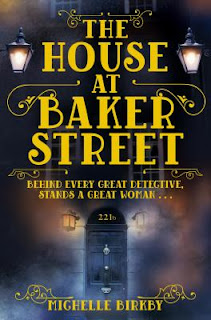 
Behind every great detective, they say, stands a great woman. But now . . .
Move over, Sherlock, the Sisters are Doing It for Themselves

In this case, the sisters are Mrs Martha Hudson, the long-standing landlady of 221B Baker Street and housekeeper to the great detective Sherlock Holmes, and Mary Watson, the wife of Dr John Watson, Holmes’s friend, fellow-lodger and fellow-investigator. At a meeting in Chiswick Library in October 2016 the author described how she came to begin the series of which this book is the first. Since childhood she had been a great fan of the Sherlock Holmes stories, had read them all, and had seen all the adaptations for film and TV especially the iconic series with Jeremy Brett as Holmes. But over the years she became aware of the crucial part played in some of the investigations by Mrs Hudson, and also noted Holmes’s scornful attitude towards women, thinking them weak, over-emotional, hysterical and guilty of dragging a man’s attention away from cool logic, although he did allow that a few could be strong, intelligent, and independent. So she felt that it was time the Holmes women could, and should, do it for themselves. She gave Mrs Hudson a past: she is a widow whose beloved husband died after only 6 months of marriage and whose posthumous son died at the age of 7.

Martha and Mary are now firm friends and spend much time together in the kitchen where, unknown to Holmes and Watson, they listen via a vent in the kitchen ceiling to the conversations between Holmes and Watson and on occasion with Holmes’s clients. One of these is a young woman who is such a ‘shrinking violet’ that all she can bear to tell him is that she is being blackmailed but cannot bring herself to say what about and whether there is any evidence. Annoyed, Holmes sends her away but Mrs Watson and Mary intercept her and, with the aid of cups of tea, cake and much sympathy, the young woman, Mrs Laura Shirley, reveals that she has been sent several letters accusing her of gross misconduct, unfortunately so disgusting that she has destroyed them. Laura is completely innocent of such behaviour but she is afraid that her husband will believe them. Without the letters there is little that Mary and Martha can do but they persuade Laura, if she has any more, to let them have them. Another letter comes and the allegations are indeed disgusting although there is no demand for money or any sort of favours, simply to broadcast them to all and sundry. So Mary and Martha decide to act, but they need assistance, not from Holmes and Watson who would surely try and prevent them but from the Baker Street Irregulars, the gang of street urchins who already act, in their own way, for Holmes. Wiggins is the streetwise leader of the gang, Billy who can read and is already a page-boy in the Baker Street establishment, and later on there is the sharp, knowing Micky. Martha and Mary soon establish that frightened, timid Laura is not the only victim of the blackmailer, there are many others some of whom have been driven by his menaces to commit suicide. Their search leads them to Whitechapel, London’s most notorious and dangerous slum, and also to the homes of the rich and influential. At the same time, it becomes clear that the blackmailer is now turning to violence, and then to murder . . . Martha and Mary must identify him or more lives will be lost.

This book is thoroughly enjoyable with lively characters and a fast-moving plot. Martha and Mary may not have all Holmes’s cerebral deductive abilities but they are able to empathise with the victims and eventually, well before the days of forensic psychiatry, to understand the motives of the murderer and to identify him. Very much recommended.
------
Reviewer: Radmila May 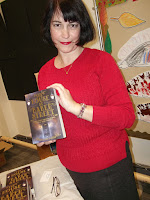 Michelle Birkby has always loved crime stories, and read her first Sherlock Holmes book when she was thirteen. She was given a beautiful collection of all the short stories and has been hooked with the wonderful, gas-lit, atmospheric world of crime and adventure ever since. A few years ago Michelle was re-reading The Empty House and a blurred figure in the background suddenly came into focus. It became clear to her that Mrs Hudson was much more than a housekeeper to 221b and she'd always been fascinated by Mary Watson's character. So she set about giving the women of Baker Street a voice and adventures of their own . . . The House at Baker Street is the first book in the exciting Mrs Hudson and Mary Watson Investigations.