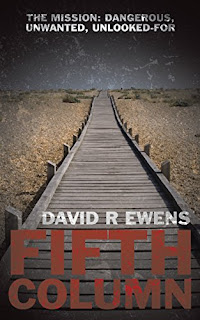 This is the fourth in the author’s series featuring private investigator Frank Sterling who operates from the fictitious East Kent seaside town of Sandley. It opens with Sterling’s friend Mike Strange, former spy but keeping a pub also in Sandley, meeting in a café in Waterloo with a man called Mohamed. Mohamed has, it appears, infiltrated a terrorist gang, motivated not by ideology nor by religious zeal, but purely by money, to carry out terrorist attacks for whoever pays them. This time, it appears, the planned target is somewhere on the south coast but what and when is contained on several password-protected memory sticks which Mohamed passes on to Strange. But Strange becomes aware that he is being followed and so when he returns to Sandley he passes the memory sticks to Sterling before his pursuers can catch him. Now it is Sterling who must evade capture, and who is in peril especially when Strange’s pursuers catch up with Strange and torture him until, under extreme duress, he discloses that the sticks have been passed to Sterling. So Sterling has to go on the run and, although he is able to depend on various friends including his teenage sweetheart Stacey Sunnington, now divorced and with a computer-savvy teenage daughter Olivia, time and time again he has to rely on his own courage and resourcefulness until his adventures achieve a successful but unexpected conclusion.

I think that, apart from the Waterloo station café, all the locations are fictitious. They are, however, vivid and meticulously imagined, perhaps based on real-life East Kent towns. The many characters are also strong, realistic and many-faceted. This is a lively and fast-paced read.
------
Reviewer: Radmila May

David R Ewens was born in Scotland and spent an early short part of his life in Australia. Subsequently he was brought up and received his full time education in East Anglia. He lives and writes in Kent, where he has been based for many years. After a career in further and adult education, including work in policy and research, he has written four novels and some short stories.
His writing has been influenced by lifelong experience of progressive deafness, eased recently by a cochlear implant.