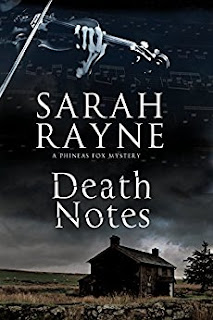 Death Notes introduces Phineas Fox, a professional music researcher. When offered a commission researching the life of gifted musician Roman Volf, for a TV documentary, Phineas is unenthusiastic. Despite his agent’s entreaty of ‘Highly Prestigious’ Phineas doesn’t want it.   Roman Volf, says Phineas, may have been a gifted musician but he was also a villain, a womanizer, and he was hanged for helping to assassinate a Russian tsar.  But the mention of a generous fee has Phineas musing on his recent move to a large and expensive flat and reluctantly he agrees to take the commission.

His initial investigations turn up an article by Russian journalist Feofil Marknov stating that Roman Volf was a virtuoso violinist, charismatic and brilliant.  It refer to his Pied Piper style exultant midnight march of the rebels across the Pevchesky bridge, two days after the Tsar’s death. But most of the references he finds focus on Roman’s part in the assassination in March 1881. Mindful of the TV element Phineas feels this Pied Piper march would make a dramatic reconstruction and consults many books to try and track down more of this exploit and eventually finds further reference in another article by Marknov.   After burrowing through many dusty bookshops and equally dusty tomes Phineas finds Lost Buildings of Old Russia and there he strikes gold. His discovery sends him seeking the Skomorokh Theatre and its exact location.

As Phineas pursues his investigations he begins to believe that Roman Volf could have been innocent and was executed for something he didn't do. And what of Roman’s descendants, if any?

Following the trail takes him to the west coast of Ireland and the quiet village of Kilcarne, where he finds mystery upon mystery, reaching from 1881 to the present day.

There are multiple strands and interesting characters: Beatrice still grieving for her daughter and husband andliving in an isolated cottage; The reclusive Maxim Volf; and interspersed throughout the narrative extracts from music hall entertainer Mortimer Quince’s diary.

In this fascinating multi-layered novel, Sarah Rayne weaves a fascinating tale with many twists and turns that had me eagerly turning the pages to  see how the story would unravel. I loved this enthralling book and look forward to the next in the series.
-------
Reviewer: Lizzie Sirett

Sarah Rayne's first novel was published in 1982, and for several years she juggled writing books with working in property, pounding an elderly typewriter into the small hours in order to meet deadlines.  Much of the inspiration for her dark psychological thrillers comes from the histories and atmospheres of old buildings, a fact that is strongly apparent in many of her settings - Mortmain House in A Dark Dividing, Twygrist Mill in Spider Light, and the Tarleton Theatre in Ghost Song.  She has written more than 25 books to date, and her work has met with considerable acclaim, with Tower of Silence being long-listed for the 2005 Theakston's Award. Her books are also published in America, as well as having been translated into German, Dutch, Russian and Turkish.  In 2011 she published the first of a series of ghost-themed books, featuring the Oxford don, Michael Flint, and the antiques dealer, Nell West, who made their debut in Property of a Lady. Several years ago Sarah also wrote six contemporary horror books, originally under the pen-name of Frances Gordon .