'The Fifth Heart' by Dan Simmons 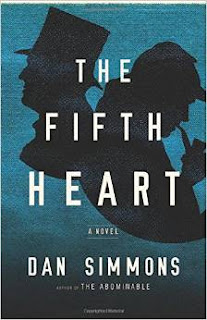 In a fascinating combination we have the writer Henry James and Sherlock Holmes, both with doubts about their existences.  Sherlock Holmes fears he is a mere literary construct yet Henry James remembers meeting Holmes at a garden party 4 years before.  At the beginning of this book they have an encounter on the bank of the Seine in 1893 Paris.  As a result of that meeting Holmes persuades a reluctant James to accompany him on a U.S. Investigation;  and very doubtfully James introduces the disguised Holmes into the company of his friends in Washington Society.  Somehow he has been convinced that he must aid Holmes in an adventure for which James has no heart.

This is a book full of references to novelists and politicians of the era.  Mark Twain, Theodore Roosevelt, Henry Cabot Lodge, Vice President Stevenson  feature as powerful portrayals within the Gilded Age society of Washington DC.  Dan Simmons gives detailed pictures of Washington, New York and Chicago in the 1890s showing, in particular the building up of Washington and the World Fair of 1893 in Chicago.  The luxurious travel of the wealthy by sea and on US railroads is a fascinating sideline in a book full of delicious distractions.  James's critical reading of various Sherlockian tales includes a wickedly funny survey of the Adventure of the Red headed League in which he summarises the improbabilities of the work on the list of names that is  Jabez Wilson's task.

The mysteries that Holmes investigates concern the suicide of Clover Adams and the possibility of anarchist plots to kill the American President.  Many classic Doyle characters emerge - Moriaty, Irene Adler, Mycroft Holmes.  Even Holmes himself begins the book disguised as Sigerson the Norwegian explorer whose adventures are briefly referred to in The Return of Sherlock Holmes.   The Holmes references are all accurate and the Henry James ones feel right though I have not much experience of his books.  The other famous men behave as might be expected - I found the portrait of Theodore Roosevelt particularly good.

It is a long and complex story but the author carries his readers along easily.  Conclusions are reached at the end with many rabbits pulled out of hats!
------
Reviewer: Jennifer S. Palmer
Dan Simmons has written many books with Drood  being one of the most memorable. 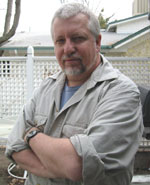 Dan Simmons was born in Peoria, Illinois, in 1948, and grew up in various cities and small towns in the Midwest. Dan received a B.A. in English from Wabash College in 1970, winning a national Phi Beta Kappa Award during his senior year for excellence in fiction, journalism and art. Dan received his Masters in Education from Washington University in St. Louis in 1971. He then worked in elementary education for 18 years. Since becoming a full-time writer, Dan likes to visit college writing classes, has taught in New Hampshire's Odyssey writing program for adults, and is considering hosting his own Windwalker Writers' Workshop. Dan's first published story appeared on Feb. 15, 1982, the day his daughter, Jane Kathryn, was born. He's always attributed that coincidence to "helping in keeping things in perspective when it comes to the relative importance of writing and life." Dan has been a full-time writer since 1987 and lives along the Front Range of Colorado -- in the same town where he taught for 14 years -- with his wife, Karen. 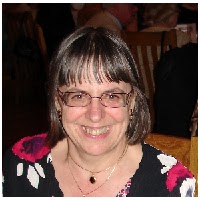