‘Every Night I Dream of Hell’ by Malcolm Mackay 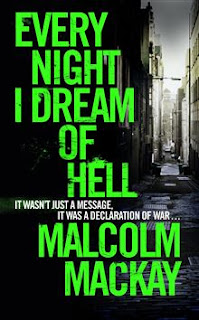 This latest instalment of the author’s Glasgow crime series features many of the same cast of criminal characters in his earlier novels. This time the story is mostly told in the first person by Nate Colgan, who looks and acts like the professional ‘hard man’ he actually is; usually that’s enough to scare off anyone who looks like causing trouble. Nate was nominally independent but worked for mostly for Peter Jamieson who runs the biggest crime ‘industry’ in the city; even though he is now in Barlinnie Prison he still controls his organisation through the smartest of his subordinates Kevin Currie. But Currie isn’t Jamieson and is worried about keeping control of the organisation. So at Jamieson’s behest Currie takes Nate on as ‘security consultant’, expecting that Nate’s scary reputation will mostly be enough to frighten off anyone who might be looking for rich pickings from the possibly crumbling organisation. What Currie doesn’t know, because Nate never tells anyone about his private life, is that Zara Cope, Nate’s ex-lover and mother of his beloved daughter Rebecca, is back in Glasgow to get some money that Nate still owes her – or so she claims. But nothing about Zara, the femme fatale of classic noir crime fiction, is ever simple; on the one hand Nate doesn’t trust her, on the other he still cares for her although he knows that Zara feels nothing for him. So just what does she want? Certainly not her daughter who is safely with her grandparents which is just how Nate wants to things to stay. And then trouble erupts. And a man called Lee Christie, a small cog in the Jamieson/Currie organisation, is killed in an execution-style shooting. And no-one in the organisation knows by whom or why. One guess is that it was a ‘message’ for Angus Lafferty who controls the drugs trade section of the organisation and for whom Christie worked. As for the actual ‘executioners’ the name Adrian Barrett comes up; he’s one of a trio of young hoods from Birmingham who have arrived in Glasgow – but are they acting on their own initiative or are they answering to someone?

I have praised two of the author’s previous Glasgow novels in Mystery People: The Necessary Death of Lewis Winter (www.mysterypeople.co.uk) and The Night the Rich Men Burned (www.promotingcrime.blogspot.co.uk 2014 November) and this one deserves equal praise. It portrays a bleak, unforgiving, totally claustrophobic world in which no-one trusts anyone, quite rightly as it turns out for everyone is prepared to betray everyone else. Nothing else impinges (not even the fortunes of Celtic and Rangers football clubs!) There is an immense number of characters but the author has provided a full list of characters – very helpful to reviewers! I like the way in which in this series the protagonist varies from novel to novel; this provides a variety of outlook and tone which is welcome.

In this novel, Nate, while far from being an admirable character (as Zara tells him towards the end ‘You think you’re the good guy. You’re not. You’re the man that the beasts are scared of. You could walk away but you don’t),  sets his face against doing the one thing that he previously refused to do – kill someone in cold blood – but in the end does so. And finds that he has been ‘played like a puppet by men who now feared me. It’s a very dangerous thing, to have powerful men terrified of you.’ The outlook for Nate in future novels is not good.
------
Reviewer: Radmila May

Malcolm Mackay was born and grew up in Stornoway where he still lives. His debut, The Necessary Death of Lewis Winter, marked the beginning of the Glasgow Trilogy, set in the city's underworld and was longlisted for both the CWA John Creasey Dagger for Best Debut Crime Novel of the Year and the CWA Ian Fleming Steel Dagger for Best Thriller of the Year. Every Night I Dream of Hell is his fifth novel.