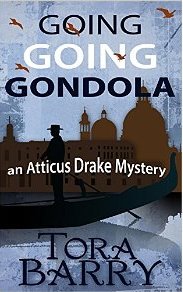 Atticus Drake cannot believe his good fortune when beautiful, wealthy Laura Hutchinson invites him to lunch with her at the Dorchester. Atticus and Laura had been to school together and Atticus had worshipped Laura, although he knew she was out of his league. Now he banishes the memory of all the cruel jokes and jibes Laura and her followers had inflicted upon him and convinces himself that she really does fancy him.
Atticus has recently lost his high-powered job, and with it he has lost a large chunk of his confidence and identity. Despite his misgivings, he agrees to join Laura in Venice. She has booked him onto a First Class flight and into a luxury hotel and Atticus feels uncomfortable and out of his depth.

Atticus' sister, Hilly, a lawyer at present on maternity leave, also remembers Laura from their school days. She didn't like Laura then and she doesn't like what she hears about her now. Suspicious of Laura's motives, Hilly takes her own steps to keep her brother safe.

Venice is beautiful but Atticus feels that there are dark, malignant secrets under the surface. He is distracted from his pursuit of Laura by meeting an amazing street magician, Kate. Atticus is torn between two gorgeous women and feels totally out of control with both of them. However, choosing between two women soon becomes the least of Atticus' problems as the danger escalates and he finds himself in a sinister nightmare. He realises that, if he cannot extricate himself, it seems likely that Venice will be his final resting place.

Go Go Gondola is the first in the Atticus Drake mystery series and, as the title implies, there is a strong element of comedy amongst the crime, with Atticus equally worried about discovering who is trying to harm him and deciding whether he should purchase a £800 pair of loafers. At first I found the unconventional page lay-out distracting but grew accustomed to it as the action picked up.  This is an amusing and lively crime romp, with a hapless but likeable hero and some beautiful descriptions of Venice. Go Go Gondola is a very enjoyable read.
------
Reviewer: Carol Westron

Tora Barry is a professional journalist and writer, and has contributed to many journals, magazines and websites. In addition to this, she has always written fiction, and is now an independent publisher as well as the creator of several novels, including the Atticus Drake series. Tora lives near Bath in the UK, and when not writing, as well as when she should probably be writing, she enjoys cooking, sharing good wine with good friends, walking, painting and theatre.