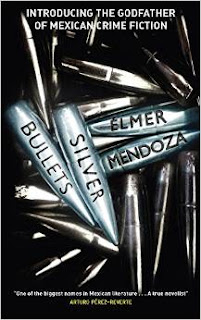 In the city of Culiacan, Mexico’s capital of narco-crime, murder is as commonplace as to be barely remarkable and police investigations are perfunctory to say the least. But the murder of lawyer Bruno Camizales is in a different category. Bruno was the son of a former government minister and worked as a legal adviser at Social Security. Detectives Edgar Mendieta and Zelda Toledo are assigned to the case. Those who knew Bruno spoke of his kindness and his concern for others but also of his wild promiscuity with both men and women, one of whom, Paola Rodriguez, whom he had jilted some months previously and who had vowed vengeance, kills herself on hearing of his death. One oddity about Bruno’s death is that the bullet that killed him was silver. Why silver? Where had it come from? Does it have some significance? In the search for the identity of Bruno’s killer and the connection, if any, with either his tangled love life or the omnipresent narco-crime or the all-pervasive corruption,  Mendieta and Zelda, separately or together, follow numerous leads and are led up countless blind alleys while simultaneously finding that various possible avenues of investigation are closed off for political reasons by their superiors who are in their turn pressurised by outside interests. Not until the end do Mendieta and Zelda work out the truth and achieve a sort of justice. Thus the picture the novel presents of Mexico is not at all a pretty one particularly if one’s previous literary experience of Mexico is limited to Dora Explorer! But no doubt it is more truthful.

The author has been described as ‘one of the biggest names in Mexican literature ‘ and ‘the literary representative of modern-day Mexico in its narco-incarnation’. The translation (by Mark Fried) is excellent.
------
Reviewer: Radmila May

Élmer Mendoza was born in Culiacán, México in 1949. He is a professor and author, widely regarded as the founder of 'narco-lit', which explores drug trafficking and corruption in Latin America. He won the José Fuentes Mares National Literary Prize for Janis Joplin's Lover, and the Tusquets Prize for Silver Bullets.