‘The Venetian Venture’ by Suzette A. Hill 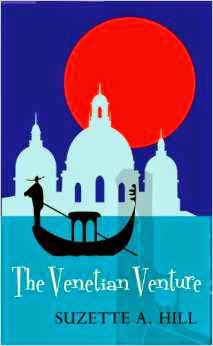 Venice 1954: Rosy Gilchrist comes to the legendary city with its gondolas, canals and fabulous palazzi on a quest - to find a particular copy of a translation of the Latin writer Horace’s Odes by the Victorian scholar Dr Bodger. Not just any old copy but one with Bodger’s annotations to the Odes for although Bodger’s translation is pedestrian, his notes are remarkably percipient and Rosy’s boss at the British Museum, capricious Dr Stanley wants it for an exhibition he is arranging. The quest is initially unsuccessful - the owner of the bookshop to which Stanley has directed Rosy denies all knowledge of that particular copy - but Rosy decides to stay on and pursue her enquiries. After all, in a city so full of charming cafes and excellent restaurants serving marvellous meals and exquisite ice creams washed down with a number of gin-and-tonics accompanied by (this being the 1950s) quite a few cigarettes, there is plenty to occupy Rosy along the way. Not only that but there is also a whole host of eccentric characters to keep her entertained. For starters, Rosy’s old acquaintances from A Little  Murder, Professor Cedric Dillworthy and Felix Smythe are also in Venice, still bickering amicably; they are there as dog sitters to Felix’s elderly cousin Violet’s beloved Caruso while she is in the US. And there is Violet’s lodger, the ex-pat Guy Hope-Landers and his friend the American painter Bill Hewson. An unpleasant young man, Edward Jones, appears: he is also searching for the Bodger having been commissioned by Bodger’s great nephew Sir Fenton Bodger to find the elusive volume; he will do anything, even blackmail, for money whereas his arrogant sister Lucia is primarily interested in social climbing. Also appearing are the elderly and very odd identical twins, Dilly and Duffy. And finally there is the charming but mysterious Carlo Ricardo who learned his particularly florid English in a POW camp in Britain.

But it is Rosy’s eccentric landlady, the behatted Mrs Dillworthy, and one of her other lodgers who inform Rosy that an eccentric (and then some!) millionaire, Farinelli Berenstein, has offered £1 million to anyone who finds that particular Bodger plus a certain Murano vase. Mrs D who dearly likes a flutter has bet that it will not be found before the offer expires; since that will be in a few days she expects to win.

Then there are deaths; first the bookseller Pacelli is found murdered and then, when one of the gallery of eccentric characters that have gathered around Rosy drowns, it seems all too likely that it is the news of the £1 million offer that has precipitated both deaths.

This is a charming and delightful story told with a gentle but dry wit but held together with firm plotting where all loose ends are tied up. Yet it is not entirely ‘froth-and-bubble’ with added murder: the recent WWII casts its shadow especially for those who had been involved in active service while Rosy herself still grieves, silently but deeply, for her parents and her RAF pilot fiance who died during the conflict. Highly recommended.
------
Reviewer: Radmila May 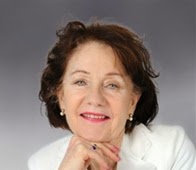 Suzette Hill  was born in Eastbourne, Sussex, in 1941; but has lived in many  locations - the Midlands, Nottingham, Newcastle-upon-Tyne, Berkshire - and finally in retirement to Ledbury in Hereforshire. Although being an English graduate of two universities and having taught ‘Eng. Lit.’ all her professional life, she never did ever contemplate doing any creative writing herse
Posted by Lizzie at 21:01