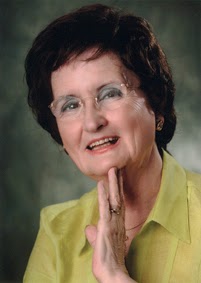 Eileen Robertson  was born in Yorkshire and was for many years a lecturer in German and Creative Writing at Highbury College, Cosham, and at Portsmouth University.
Eileen’s first cosy crime novel, Miss McGuire is Missing, was published by Robert Hale in July 2010.
It went into reprint three months later and in May 2011 was taken up by Harlequin Books of Canada.
Her second book, Blackmail for Beginners, was published in February 2012.
We’ll be Watching You, was published in 2013
. Eileen’s books have been described as ‘cosy crime with a hard edge.’
www.eileenrobertson.co.uk/

Carleigh: How did it feel to get your first book published?
Eileen: I was very nervous about sending my first book off to the publisher’s. I kept fiddling with the script until my more experienced writer friends said “for heaven’s sake, just send it off will you. Once you’ve posted it you’ll not hear a thing from the publishers for at least 3-6 months, so relax.”
Wrong! So having sent off the manuscript I toyed around thinking about what to write next. Imagine my surprise when less than two weeks later I received a letter from Robert Hale Publishers offering me a contract with first refusal for my next two books.  I sat staring at the letter, I could not believe what I was reading, I wanted to pick up the phone and ask the publisher if they’d got the right person, surely they can’t mean me? I’m not supposed to hear from you for at least another three months”. I re-read the letter and eventually the message sank in. My hands began to shake and I checked the envelope address twice just to be absolutely certain they’d got the right person, but my name was on it. It was true, I was not hallucinating…and then I felt on top of the world.

Carleigh: Tell us about your new novel We’ll Be Watching You.
Eileen: ‘I took the idea for this story from Aesop’s Fables, you probably know the one?  It’s called ‘Cry Wolf’. It’s about a shepherd boy who bored and frustrated decides to upset the villagers by crying wolf. Eventually the villagers ignore him, until one day the wolf does come…and it’s too late. Christine, my heroine is in much the same situation as the shepherd boy. Not only has she an invalid mother to care for, she’s been through a nasty divorce, and lost her home and her job. Bored out of her mind she reports her neighbours to the police for every triviality until one day a row breaks out with Harry Myers, a neighbour. Christine is upset, she vows that she’s never going to shop locally again and visits the town Hypermarket. It is there she witnesses a robbery. The odd thing is she is sure she knows the getaway driver, but she can’t place him. Even worse when the car drives off the driver sees her and from his expression she’s sure that he has recognised her…’
I think that in every village or small town there is a curtain twitcher. We all know of them, they often are standing at the window watching the neighbours go by, and they miss nothing. This is harmless enough, these are people who are lonely and frustrated and their idea of relaxation is keeping an eye on their neighbours and passers by. But what, I thought, happens when they really do see something that is wrong? They will report it, but perhaps because of their reputation as a nosy person, the police won’t take them seriously. In We’ll Be Watching You.  I’ve given Christine (also a nosy person,) a an additional problem; that or caring for her mother, Emily, who is a recent stroke victim and a feisty old lady with a mind of her own and decided weakness for a drop of the hard stuff. Also I’ve put in the character of Harry Myers, who tries to help Christine but although she is attracted to him she is suspicious of him and feels she cannot trust him. After all, she thinks, he could well be one of the robbers.

Carleigh: Writing mystery and suspense books must require a lot of imagination and creativity, how do you come up with some of your story lines?
Eileen: Story lines are all around us. You only have to look in the daily newspapers, although some of the articles in there are really stranger than fiction. As for me, most of my ideas begin with “What if?” For instance I recently took a short break over in Cyprus. Whilst out there walking I watched a young couple swimming in the sea below. They were playing around having fun. Further along the cliff top I noticed a man taking photos of the scene below us, and, I presumed, of the distant yacht anchored out at sea.


Here’s where the ‘what ifs’ came into my mind; What if the man who was swimming decided to force the woman under the waves? A perfect murder. He could easily claim it was an accident, there were no other witnesses….Or were there? What about the man with his camera on the cliff above them. How would he react? Would he go with his film to the police? Or might he think of an easier way to make some money. Or was he really the tourist he appeared to be? Could he be making sure that a contract really had been fulfilled?  There are so many twists this tale could take. All it needs is a suspicious mind like mine, and after all I come from a long line of policemen.

Carleigh: What is your favourite season?
Eileen: Autumn is definitely my favourite season. I love to see the changing of the colours on the trees, it’s really wonderful how the different shades of russet and amber and the mellow yellows blend in with the green leaves so beautifully. Autumn brings a warmth and maturity to the year, a sense of completion before the cold and hardness of winter comes.

Carleigh: Where is your favourite spot to write?
Eileen: I usually write in my office on a morning and in long hand, I find that when writing if I’m not sure of a sentence I can just strike it out. And if I change my mind I can come back to it again. You can’t do this on a computer without a lot of fiddling, so I stay with long hand. I write with my back to the window so that, being nosy, I’m not tempted to look out and see what my neighbours are up to. I don’t want to turn out to be another ‘Christine.

Carleigh: Can you tell us about any upcoming books?
Eileen: At the moment I’m working on the sequel to Blackmail For Beginners, which is available on Amazon. The new book will be titled, Blackmail For Improvers, and I hope to have it finished by next spring. I’ve also sketched an outline for the sequel to Miss Mcguire Is Missing, and this time I’ve placed the inimitable trio of Ben, Rosa and Anna in Key West, Florida. They’ve disembarked from a cruise ship and are about to travel north up the west coast of Florida by coach. Anna has found a new love in her life, (Ben calls him a toy boy,) and Rosa has already managed to get herself into an embarrassing situation. All seems well as they board the coach, blissfully unaware of the dangers ahead of them. The working title for this book is, Kidnapped In The Keys, which should be out in 2015.

Carleigh: Do you ever miss being a lecturer?
Eileen: Yes, I certainly do. But there are compensations. Often I’m asked to do a workshop at the Winchester Conference in England and there I give advice to other aspiring novelists. Also I recently led a weekend crime writing course in Leeds, Yorkshire, (my home City,) teaching students how to structure a novel and how to create conflict. I really enjoyed this course, and I think the students did as well. If time allows I’m certainly hoping to do more of these courses in the future.

Carleigh: Do you have any advice for aspiring authors?
Eileen: The first thing I would say is to think about the tale you want to tell. The story must be important to you. Don’t just put words on paper, write from the heart. As a novelist you should care about your characters, you should try to see things from their point of view. You will need to be tenacious and persevere and finish your book before approaching any agent or publisher. Every writer I know has suffered the pain of many rejections, so don’t lose heart. However, should an editor make some comments in your rejection letter, listen to their advice. And if you receive the same advice from another editor, act upon it. In this area they know more than you do. Finally be patient, if you have a good story, remember that tenacity and a little bit of luck will get you there in the end 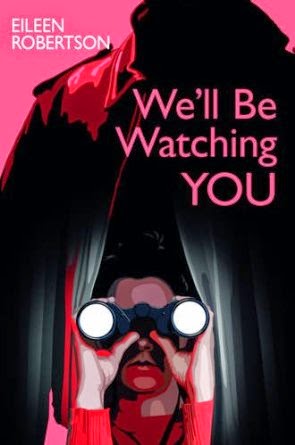 Between dealing with a lying ex-husband and losing a longtime job, Christine Brett doesn’t have much trust left. So she takes her responsibility as Neighborhood Watch head very seriously. She can’t help it if her neighbours, especially good-looking Harry Myers, see her snooping and constant police calls as a bigger menace than any prospective criminals. And now that she’s witnessed a robbery, she knows they’ll agree she’s right to be cautious . . . until they don’t. Because no one really wants to believe Christine. Or that someone is now watching her—and listening in on her most private moments. As an insidious web of deceit closes in on her, Christine must risk trusting those she has good reason to fear. For someone can’t wait to prove good fences make good neighbours—and even better coffins.…