‘How the Light Gets In’ by Louise Penny

Chief Inspector Armand Gamache’s team has been replaced by staff, who do not support or respect him and he appears to be working on his own fighting internal politics and trying to find a murderer.

A woman is found dead, packing to spend Christmas with her new friends at Three Pines, the place where Armand Gamache feels most at home.  As a result of these links, the time of year, and also who the victim is, Chief Inspector Gamache’s help on the case is welcomed.   He finds himself working on a crime with its roots going back many years, to a time when the dead woman was one of five famous, sisters, the Ouellet quintuplets.  With his last trusted team member, Inspector Isabelle Lacoste, he tackles the case, along with the public relations cover up which it could reveal.

At the same time, corruption and plotting within the Surete is coming to a head and to save himself and his career Gamache needs to find out which of his colleagues he can trust and who, frankly, is out to get him.  As he does not know how high the problems go, he is reluctant to trust anyone, and the net is closing in on him. Trying to protect those he cares about, whilst putting himself in the crosshairs, is a plan that holds little appeal, but may be what he has to do to expose the sinister forces within the police itself.  Gamache’s challenge is trying to find out who the villains are, before he is hounded out of the force and perhaps before his previously loyal assistant and friend, Jean-Guy Beauvoir, is set up for a fatal encounter.

This is an absorbing book, well written and with an intricate plot that required me to read it twice (such hardship) to get all the twists and get into the heads of the key protagonists.  I wish that I had come across Louise Penny sooner, as a result of reading this I will now be tracking Chief Inspector Gamache back through the library stacks.  Louise Penny writes a good read and for me has elements of many different styles of crime fiction in her writing.  With the slightly isolated nature of Three Pines, and quirky characters such as Henri the German shepherd and Rosa the duck, she creates some of the atmosphere often found in more traditional “cosy” fiction.  This is offset against the dark backdrop and sinister cunning of political plotting, and even cybercrime, carrying some of the brooding nature from more gritty crime novels.  The only thing that can be said against this book is that you cannot turn your brain off to it or you will miss something!
------
Reviewer: Amanda Brown 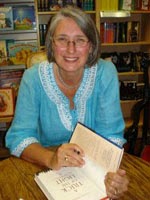 Louise Penny was born in Toronto in 1958 and became a journalist and radio host with the Canadian Broadcasting Corporation, specializing in hard news and current affairs. My first job was in Toronto and then moved to Thunder Bay at the far tip of Lake Superior, in Ontario. It was a great place to learn the art and craft of radio and interviewing, and listening. Louise had always dreamed of writing and says ‘ now I am. Beyond my wildest dreams (and I can dream pretty wild) the Chief Inspector Gamache books have found a world-wide audience, won awards and ended up on bestseller lists including the New York Times. Even more satisfying, I have found a group of friends in the writing community. Other authors, booksellers, readers - who have become important parts of our lives. I thought writing might provide me with an income - I had no idea the real riches were more precious but less substantial.’  Louise lives with her husband Michael in a small village