‘Exit the Thief’ by Danny Miller 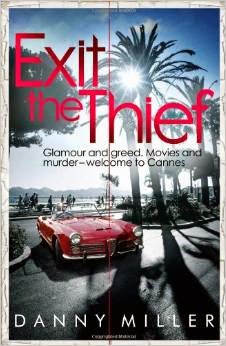 In this fast paced adventure Vince Treadwell goes to the French Riviera to pursue a famous cat burglar.  This is in 1965 during the Cannes Film Festival and Vince is concerned with a movie star's jewels which had been stolen from the Ritz in London.  Vince has already had some painful experiences ending up as the chief suspect in the murder of a jewel fence known as Teddy the Levantine.  His Riviera trip is being undertaken in the hope of proving his innocence.

The frenetic atmosphere of Swinging 60s London is matched by the supercharged atmosphere of the Cannes Film Festival.  The luxurious high life and the scruffy back streets feature in dizzying succession.  The glamorous parties with the stars are recreated with Vince accompanied by a knowledgeable insider who certainly 'knows her tittle from her tattle.'  Vince has made contact with Jean-Jacques Messina, a famed French crime figure, nicknamed Mad Dog, who hopes for a film of his life. His style is violent and often horrific.
This is a gripping thriller with excellent recreation of that excitement of the 1960s.  Car chases trace the winding streets of Cannes and Antibes, people are shot and beaten up, drugs appear at orgies.  French attitudes to American cheap crime thriller film styles are nicely mocked as Marxist intellectuals criticise the crudity of simple narrative form as opposed to real film noir! As Vince puts it - the French 'are full of existential ennui.'  In fact anyone with pleasurable memories of 1940s to 1960s films will enjoy the satirical referencing of these movies.
This is a well written book with violent action in 'hip' style combined with tightly packed vivid  background.
------
Reviewer Jennifer S Palmer
This is Danny Miller's 3rd book featuring Vince Treadwell.

Danny Miller was born in Brighton and studied English and Drama at Goldsmiths College, University of London. As a playwright he's had his work performed at the National Theatre Studio, Bush Theatre and Theatre Royal Stratford East. As a scriptwriter he's worked for the BBC, ITV and Channel 4. Kiss Me Quick (2011) was his first novel and the first in a detective series featuring Vince Treadwell. It was shortlisted for the CWA John Creasey (New Blood) Dagger Awards 2011 and was highly commended by the judges.