‘The Ambleside Alibi’ by Rebecca Tope

Persimmom ‘Simmy’ Brown has now settled into her new home in Windermere.  Getting her florist shop up and running in the last year has taken her mind off the tragedy that caused her   to move to the Lake District.

As Simmy sets out to deliver a bouquet of flowers to a lady living on the northern fringe of Ambleside, with Christmas approaching, she is feeling optimistic. She is also intrigued by the strange message accompanying the flowers, and hopes that it won’t upset the elderly lady who opens the door to her—but fury seems to be the only registered emotion, and Simmy goes on her way.

When later that day Detective Inspector Moxon appears at the shop and asks Simmy to accompany him to the police station to answer some questions, she is first astounded, and then shocked, when she discovers that she has been named as an alibi by a man whom the police suspect of killing an old lady.

Although desperate to keep out of the investigation Simmy finds herself drawn in by feisty Melanie, her assistant at the florists, and seventeen-year-old Ben, the younger brother of Wilf, Melanie’s ex boyfriend. Ben is passionately interested in forensics,  questions Simmy closely, and egged on by Melanie - whose family have livedin the area for generations - comes up with several theories.  Soon Simmy is immersed in the complex relationships of the parties involved and by doing so unwittingly herself becomes a target.

This is a interesting mystery with some unexpectedly startling twists which took me by surprise.  I love village mysteries, they are always only solved by delving back into the past, which in itself is fascinating, as old secrets surface.  Good characterisation and some marvellous descriptions of The Lake District.  I found myself thinking, why don’t I live there?  Highly recommended.
------
Reviewer: Lizzie Hayes 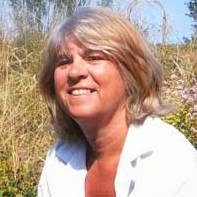