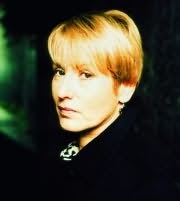 Elizabeth Corley was brought up in West Sussex.
She manages to balance her high-powered corporate job as
Chief Executive for a global investment company,
with a crime-writing career –
dealing with numbers by day and dark, creative writing by night.
A one-time committee member and vice-chairperson of the
Crime Writers’ Association, Elizabeth still is a member of the organisation.
She is married, with a stepdaughter, and divides her time between London,
Germany and France.
http://ecorleycrimenovels.com

Lizzie: You have recently published Dead of Winter, your fifth book featuring DCI Andrew Fenwick.  Can you tell us about this book?
Liz: Thank you Lizzie, for the chance to talk about Dead of Winter.  The book is about a deeply troubled teenage girl, Issie Matthias, who vanishes from her boarding school.  Everyone assumes she’s run away but she has in fact been abducted by an increasingly sadistic abuser.  After witnessing her abductor murder his brother, her safety relies on her keeping him satisfied, living in a fantasy world where she is ‘Bonnie’ to his ‘Clyde’.  Part of the book is about Issie’s journey from a very dark place to one where she is determined to do whatever it takes to survive. Fenwick is assigned to the case and the police start a search for her, consistently one step behind her abductor as he travels across the frozen Sussex countryside in the depths of Winter.  The book features Fenwick and Nightingale again as the central police characters but in parallel the reader also experiences Issie’s struggle for survival against diminishing odds.

Lizzie: When you set out to write Requiem Mass. your first book , did you already have DCI Andrew Fenwick in mind, and if so was he based on anyone, or did he emerge as you wrote?
Liz: I didn’t have him in mind at all.  Andrew Fenwick isn’t based on anyone I know.  “Emerged” is a good word to describe his creation.  That is exactly what he did.  Fenwick is an elusive character, from the first book to the most recent.  He is multi-layered and adept at hiding behind protective walls of distance that he erects around himself.  As a widowed single father he is intensely protective of his children but at the same time he finds it impossible to compromise on any investigation that he is put in charge of.  That places an increasing burden on him, particularly as the children grow older (his daughter Bess is now a teenager and some of her bad behaviour is definitely based on mine!). He remains a private man, even to me.  At the end of each book, it is as if he withdraws again and I have to coax him out for the next.

Lizzie: Sergeant Nightingale - from where did she spring?
Liz: Like Fenwick, Louise Nightingale is her own person – very much so. In the first book, she is a graduate entrant to the police on an accelerated promotion scheme.  As such she is the butt of a lot of jokes and hidden jealousy but she is a very strong and determined character who has grown with every book.  I didn’t envisage this originally, she was more there as a complement to Fenwick, but she has increasingly demanded more space and her role in the latest books is virtually equal to Fenwick’s.

Lizzie: Are the ideas for your books sparked by real events and people, or do ideas just come to you? Or a mixture of both?
Liz: The ideas arrive spontaneously and are never based on real events or people.  The places that the stories are located in are real and rooted in my experience though as I find I need to have a strong sense of place for each scene.  If I include forensic detail I research that as extensively as possible but the plots and people are entirely fictional.

Lizzie:     Do you plan your plots before you start writing?  And, if so, do your books change during the writing process, or do they pan out exactly as you originally planned?
Liz:         I wish I could; I envy and admire writers who can do this.  I’m just a storyteller pure and simple.  Quite often I picture a scene, even the denouement, and write towards this, not even knowing who will live and who will die.  So as the book grows, I’m writing as if I were turning the pages of the novel, in order to find out what happens next.  When people ask me to comment on how I achieve a sense of suspense, I tell them it’s because I don’t know what is going to happen as I am writing.  I think that might increase the tension.

Lizzie: When embarking on a new book, what area of the book challenges you the most?
Liz: The middle, always the middle.  I normally have the end in mind when I write but then things happen.  My characters won’t always do what I want them to and it can be some time before I realise why they were right and my original idea was wrong.  That is part of what I find so enjoyable when I’m writing but inevitably by the middle of the book, strands of plot end up in there that need to be cut out.  Choices need to be made, some minor characters and scenes dropped.  I sense when that need is coming and then keep putting it off, as I find it a difficult thing to do!  But the way I write, it is always necessary to bite the bullet eventually in order to drive the momentum of the story.

Lizzie: Do you have a favourite part of the writing process?
Liz: That’s a good question but I don’t think I do.  Every aspect has its charm: the first tingle of an idea, the excitement as it becomes more tangible, and the sense of progress as chapters flow.  Every now and then there are “aha” moments when something I’ve written takes on a greater significance; perhaps those are among the best times.

Lizzie: You have by my count had five books published in the UK, but I note that there is a book entitled Crescendo which I understand was published in Germany. Despite some exhaustive searching I haven’t been able to discover which of the five books it is, or if it is a completely different book.  I quote the reference to it I discovered…
‘Corley has a large following in Germany and several of her titles have been translated into
German. This is one of them. However, Crescendo, familiar to all musicians as an indication to gradually increase the loudness also gives no clue. I haven't yet figured out what is the title for the original version in English.’

Personally with the reference to music, I suspect maybe Requiem Mass. Can you enlighten me, or have I the pleasure of an unread Elizabeth Corley to look forward to?
Liz: That is a good guess but Crescendo is the German title for Grave Doubts, book three, not another Fenwick mystery thriller I’m afraid.  Requiem Mass was published as Requiem for eine Sängerin. To save anyone ordering other German titles by mistake, Fatal Legacy is Nachruf auf eine Rose and Innocent Blood is Sine Culpa.  In terms of looking forward to another novel, I am working on the sixth and making good progress so far...

Lizzie: There is quite a gap between the publications of Innocent Blood in 2008 and Dead of Winter (2013).  What occasioned this?
Liz:  The financial crisis, pure and simple.  From 2008 until end 2009, the challenges at work were especially intense and I found that they consumed all my creative energy.  As the global economy and markets have started to improve so too has my capacity to write.

Lizzie: The question I most want to ask is how do you manage to fit in writing when you are Chief Executive Officer and Managing Director at Allianz Global Investors Europe Gmbh.  Prior to joining
Allianz, you were Managing Director at Merrill Lynch Investment Managers, served as Head of Distribution for Europe, the Middle East, Africa and Asia Pacific. And was also a Partner at Coopers & Lybrand. Additionally, you have also worked in the Life & Pensions industry, and more…. I am lost inadmiration. How do you do it?
Liz: That’s kind of you, Lizzie but in fact, I was simply very lucky and then worked hard.  I didn’t go to university and my first job out of school was as a shop assistant.  I then became a temp in an insurance company.  They offered me a permanent position and the chance to study in the evenings for professional exams.  Everything else followed.  I had always enjoyed English composition at school but after I started work,


I found that I only wrote in the holidays and never sustained the focus once they were over. When my step daughter went to university about the same time I changed jobs and took a month off, which gave me a longer opportunity to write.  A while earlier I’d had the idea for Requiem Mass and once I started on the book, I found that I had to keep on writing until it was finished.  Since then (with the exception in 2008/9 mentioned before) I have always been working on a book.  I tend to write at weekends and on holiday but I always have a pad of paper with me in case there is a chance to scribble – even if it is only outline ideas for a future chapter.

Lizzie: There were some long awaited changes in Dead of Winter.  Could they herald a change in the series?  So do you have any plans for another series?
Liz:  Another great question.  It’s been suggested that Nightingale could – and some say should - have her own series but right now there remain too many unresolved issues and opportunities while she and Fenwick share the pages together.  I have also had ideas for a couple of stand-alone novels (as opposed to another series) but then Requiem Mass was meant to be a one off so who knows?

Lizzie: So what’s next?
Liz:  I’m working on book six in the series and it is zinging along at the moment.  So I’m hopeful that I won’t be so long in completing this one.  It is a book written with a survivor’s perspective, which is new for me and I’m enjoying the challenge.

My thanks to Liz for taking the time to talk to us.