‘The Necessary Death of Lewis Winter’ By Malcolm MacKay 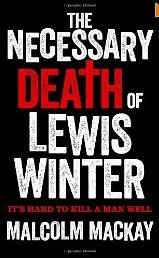 Calum Maclean is a hitman, young but one of the best: cool, cautious, highly intelligent, a pro through and through. He carries out 3 or 4 hits a year, enough to make a modest living, mostly for the Glasgow crime gang run by Peter Jamieson and his righthand man John Young. However, Calum is essentially a freelance, a loner with  no wish to be part of any organisation. But now Jamieson’s ‘staff’ hitman Frank Macleod is getting on; he is 60, he needs a new hip and his ‘hit’ days are clearly over. So Jamieson calls up Calum to deal with someone’s who’s becoming a bit of a problem. The mark is Lewis Winter, a small-time drug dealer who after 25 years is desperate to make the big time: he has a drink problem and his live-in girl friend, the beautiful and much younger Zara Cope has expensive tastes. So Lewis has even taken the risky step of becoming involved with a would-be rival of Jamieson so he has to go. But Zara, as the ex-mistress of hard man Nate Colgan and mother of their child, is not to be harmed: Winter’s death may be necessary but offending Colgan is not.

Calum sets about this new hit with his usual icy meticulousness. His planning is impeccable, but even so not all eventualities can be, or are, foreseen. After Lewis’s death, his killer is pursued by Detective Michael Fisher with much the same steely determination as that shown by Calum, but also by police constable Paul Greig who is street smart and knows when to turn a blind eye, usually for money . . . and when not.

This hard-boiled novel is the first of a trilogy set in Glasgow and the first by this new Scottish writer, with the prose in short, dramatic, staccato sentences. The characters  reveal themselves not just through dialogue but also interior monologue as they set in train, or react to, events. None is particularly sympathetic, apart from the hapless Lewis Winter, but they are interesting. I thought it was excellent.
------
Reviewer: Radmila May

Malcolm MacKay Malcolm Mackay was born and grew up in Stornoway where he still lives. The Necessary Death of Lewis Winter’ his debut, marks the beginning of the Glasgow Trilogy, set in the city's underworld. The series also features How A Gunman Says Goodbye And The Sudden Arrival Of Violence.