‘A Killing of Angels’ by Kate Rhodes 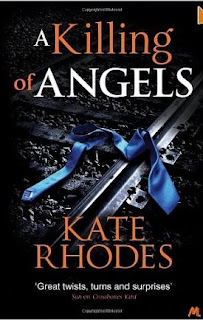 Like many books these days, this book starts with a prologue. I generally don’t find them interesting. Usually they are about an unknown person being killed, and as as you don’t know who the person is, and therefore have no real feeling about them, the point of a prologue generally escapes me.  However, regardless of any knowledge of the person involved, this is a gripping prologue for the sheer strength of the writing which descriptive powers had me there, on that underground.

This is the second in the series featuring psychologist Alice Quinn. Following the death of one of the senior executives of Angel Bank one of London’s most successful investment banks she is asked by DI Don Burns to work with him to build a profile of the killer.  Alice had not been too enamoured of DI Burns the last time they worked together but he seems somewhat changed since she last saw him so she agrees. To get a handle on the case and the world of banking Alice attends a bankers do at ‘the oldest gentlemen’s club in town’. And here she meets Andrew Piernan.

The discovery of a second body, also associated with Angel Bank, together with a postcard of an angel from the National Gallery, and a handful of white feathers seems to signify that they have a serial killer taking out employees of Angel bank.

Alice leads a complicated life, her drug-addicted brother Will has sort of moved into her riverside flat, although he retains his dilapidated van which he often retires to when things don’t go his way. Her mother is a nightmare, and Darren, one of her schizophrenic patient’s is stalking her.  But her friend Lola is a sweetie.

As Alice and DI Burns investigate in London’s hottest summer on record, her only respite seems to be the growing attachment she has to Andrew Piernan, but Alice is terrified to commit herself, after the violence of her last relationship. (see Crossbones Yard).

When Alice is attacked one night she assumes the ‘Angel’ killer has her in his sights but where was Darren?  The tempo steps up as the killer’s campaign continues with the chief target being Max Kingsmith, Director of the Angel Bank. Alice suspects that Poppy Beckwith, London’s highest paid prostitute is implicated in the killings, but no one takes her seriously.

If you have read Kate Rhodes first book Crossbones Yard you will be aware that Kate is clearly a talented writer.  And A Killing of Angels only her second book puts her up there with the best in crime friction today.
------
Reviewer: Lizzie Hayes 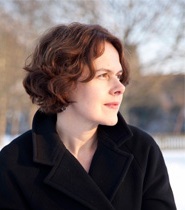 Kate Rhodes was born in London. She has a PhD in modern American literature and has taught English at British and American universities. She spent several years working in the southern states of America, first in Texas, then at a liberal arts college in Florida. Kate’s first collection of poems Reversal was published in 2005, her second collection, The Alice Trap was published in 2008. The Guardian described her poems as “pared back and fast-moving, the short lines full of an energetic lightness of touch”. Kate has been awarded a Hawthornden Fellowship, and her poems have been shortlisted and won prizes in a number of competitions including the Bridport Prize and the Forward Prize. Kate is currently writing full-time and lives in Cambridge with her husband Dave Pescod, a writer and film maker. Crossbones Yard was Kate’s first crime novel. The second novel in the Alice Quentin series, A Killing of Angels was published July 2013.