‘Blink of an Eye’ by Cath Staincliffe 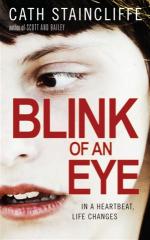 Staincliffe has become famous for the televised version of her Scott and Bailey novels. In the Blink of an Eye is not in that series, it is a stand-a-lone and a very different style. The book opens when Alex and Naomi are at a family barbeque celebrating Alex’s new job. On the way home they run down and kill a nine year old child.  Alex suffers broken bones and Naomi is left with amnesia and fighting for her life. Although unconscious when she arrived at hospital, Naomi was tested and found to have been driving way over the legal alcohol limit. And here starts the nightmare. She is shunned by everyone, including her own sister, who has a young son and sees the situation through the eyes of the bereaved mother. Naomi’s life becomes unbearable. Her mother’s life too, is entangled in the nightmare.

But this book is much more than a straight forward case of the manslaughter of a young child and its effect on the families and people close to both the victim and the driver. The end of the book took me completely by surprise rather like a wall coming down on the fast lane of the M25, or someone running out in front of your own car. I really didn’t see it coming.

Staincliffe knows how to crawl inside a character’s mind and spill out her story. A slice of realism, but a cracking good read.
------
Reviewer: Linda Regan

Cath Staincliffe was brought up in Bradford and hoped to become an entomologist (insects) then a trapeze artist before settling on acting at the age of eight.  She graduated from Birmingham University with a Drama and Theatre Arts degree and moved to work as a community artist in Manchester where she now lives with her family. Looking for Trouble, published in 1994, launched private eye Sal, a single parent struggling to juggle work and home, onto Manchester’s mean streets.  It was short listed for the Crime Writers Association’s John Creasey best first novel award, serialised on BBC Radio 4, Woman’s Hour and awarded Le Masque de l’Année in France.  Cath has published a further seven Sal Kilkenny mysteries. Cath is also a scriptwriter, creator of ITV’s hit police series, Blue Murder, which ran for five series from 2003 – 2009 starring Caroline Quentin as DCI Janine Lewis.  Cath writes for radio and created the Legacy drama series which features a chalk-and-cheese, brother and sister duo of heir hunters whose searches take them into the past lives of families torn apart by events.
Trio, a stand-alone novel, moved away from crime to explore adoption and growing up in the 1960s.  Cath’s own story, of tracing and being re-united with her Irish birth family and her seven brothers and sisters, featured in the television documentary Finding Cath from RTE.
Split Second, Cath’s latest novel in her stand-alone series about ethical dilemmas, explores the question of whether to intervene or not when violence erupts in a public place – and what the consequences might be. Dead To Me, a prequel to the popular Scott & Bailey TV show, sees the two women detectives thrown together for the very first time as they investigate the brutal murder of a teenage girl.
Cath is a founder member of Murder Squad, a virtual collective of northern crime writers.  She is an avid reader and likes hill-walking, messing about in the garden and dancing (with far more enthusiasm than grace).