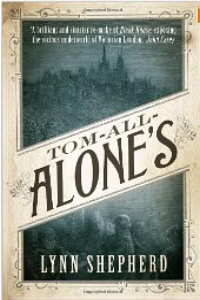 Published by Corsiar,
6 September 2012.
ISBN: 978-1-78033-169-0
Lynn Shepherd’s  second novel is a magnificent evocation of Dickensian London in 1850. She begins by taking us through the dark, reeking streets of the slums of Tom-All-Alone, as in the setting of Bleak House, to a cemetery of with her hero, Charles Maddox. The story that is told with sparkling clarity parallels some of Bleak House but also has other Victorian resonances. There is no need to have read Bleak House in order to enjoy this book but, obviously, if you have there is another dimension added to the enjoyment of the tale. The book has its own mysteries to expose so it is not confined to the Dickens palette.

The hero, Charles Maddox, is an educated young man who dabbles knowledgeably in science and is a private detective after an unjust dismissal from the London police. He has a case to investigate when he is contacted by lawyer Edward Tulkinghorn with another query. Other characters tell their stories as Charles works and deals with his own family problems. The horrors of Victorian life for the young and poor are precisely outlined and the author is able to be more honest than Dickens could have been in his own day. The story flows along as the reader becomes caught up with the characters and appreciates the era in which they lived. The denouement is shocking and highly effective. Lynn Shepherd really uses the style of the Nineteenth century while taking a post modernist view of that period.
------------------
Reviewer: Jennifer S. Palmer
The book is published as The Solitary House in the USA.

Lynn Shepherd studied English at Oxford in the 1980s, and then went back to do a doctorate in 2003.  After spending 15 years in business, first in the City, and later in PR went freelance in 2000 to see if she could fulfill her dream to be a writer. Ten years and two and a half unpublished novels later, it finally happened. Her first novel Murder at Mansfield Park, a rewriting of Jane Austen's Mansfield Park as a murder mystery, has been well received.