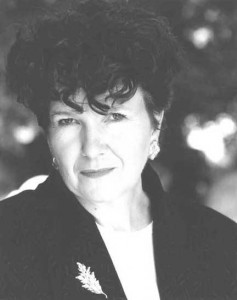 Fidelis Morgan is an English actress and writer. She has acted with the Royal Shakespeare Company, the National Theatre  in repertory in various British cities and in the West End. She has written stage plays based on Samuel Richardson’s Pamela and Patrick Hamilton’s Hangover Square. Her non-fiction writing includes The Female Wits, the first study of female playwrights of the Restoration stage and biographies of women from the 17th and 18th centuries including Charlotte Clarke. Her novels include the Countess Ashby de la Zouche series of historical crime mysteries including The Rival Queens.

Q        Fidelis, you have a new book out The Murder Quadrille.
Can you tell us something about this book?
A         It’s a modern day tale of murder and mayhem.  It starts with a dinner party at which the guests discuss a local serial killer.  You can imagine what comes next...  But I will surprise you many times along the way.  Someone told me The Murder Quadrille has more twists than a corkscrew!    I wrote it because I always wanted to write a book like this.  I became obsessed with the idea of writing a modern day standalone using Wilkie Collins’ multiple narrator structure and turning the story so that nothing was ever what it seemed.  I wanted a pacy page-turning story, seeing all the characters points of view.  Wilkie Collins likened his style to a court case where you hear from every witness.  I also use a few legal forms, memos and news-clippings.  The result is The Murder Quadrille.

Q        The wonderful Countess Ashby de la Zouch and her maidservant Alpiew books, were all published between 2000 and 2004.  Prior to that you published nine non-fiction books. What turned you to crime fiction?
A         Since I was a tiny child I always wrote and always wrote stories.  I wanted to be a fiction writer and only got into non-fiction because in the 1970s I made the astonishing discovery that women were professionally writing in the 17th century.  Before me everyone thought the first real female writer (apart from nuns) was Jane Austen.  After the success of The Female Wits, publishers kept asking me for variations on the same thing.  It’s how it works in the modern age, sadly.  You are expected to stay in your box.  So, although writing the Countess books was a giant leap from non-fiction scholarly books into historical crime fiction, at least I was staying within the period of history which the publishers already knew me for.

Q        And why did this marvellous series come to an end after four books?
A         In my proposal for book 5 of the series I had Alpiew and the Countess taking a voyage to America, and being kidnapped by pirates (Captain Kidd was busy on the high seas in 1699, just before his arrest).  My editor said “Pirates?!  What silliness.  Who’s interested in pirates these days, except children?  It’s ridiculous.  Just more silliness.” And rejected the Countess series.  Just over a year later – coinciding with what would have been my publication date – Johnny Depp’s film came out and the bookshops of the world were desperately crying out for ANY books which featured pirates for their window displays.  So I was right.  But being able to say “I told you so” is no compensation for losing the continuation of the series which is still so dear to my heart, and still going strong in America and now online with the eBooks.

Q         Where did the Countess Ashby de la Zouch come from?
A         The Countess came directly out of the non-fiction books.  I wrote a biography of Delarivier Manley, who wrote scandal sheets.  And I was also always fascinated with what became of the cash-strapped old mistresses of Charles II after he died, when the dire, dour Dutchman, William III, took the throne.  So I mixed the two up and gave her a name from a 17th century map (Patricia Highsmith says always get your names from atlases - never the phone book) Ashby de la Zouche, a name you cannot say aloud without sounding slightly drunk.  Alpiew’s name is taken from a maid in a play by Susanna Centlivre, one of my Female Wits, and is a term used in the card game, Bassett.


Q        After a gap of some years the Countess books have been recently published in the USA by Felony & Mayhem. How did that come about, and how have they been received?
A        A Countess fan walked into the late lamented Partners & Crime in Greenwich Village and wanted to buy the series.  The owner Maggie Topkiss was starting her own imprint and liked the books so much she picked them up right away. The Americans love the Countess. The Felony & Mayhem covers are the best I ever had and were recently featured in Forbes Magazine.  Pity I didn’t make it to the Billionaire list but at least I’m in the magazine.

Q         Is there a chance of any further Countess Ashby de la Zouch books in the future?
A         I certainly hope so.  The film/TV rights have been taken up continually and we’ve been very close, with scripts written.  It missed by a whisker a few years back just when at the last minute there was a management shake-up.  Terrible timing.  But the Countess rights are currently owned by a triumvirate of three of TV’s biggest stars.  The next three books are all planned out and, once I get the call, I’m ready to go.

Q          When embarking on a new book, be it fiction, non-fiction or a play, what area of the writing challenges you the most?  And are the challenges different writing a book to a play?
A          I love research.  I love offbeat people and I love spinning yarns using those people.  I’m also a structure junky.  I’ve read Aristotle, Ben Jonson, Diderot and Corneille on the laws of dramatic poesy.  It’s important to remember that Drama was around since 800 years B.C., whereas the novel only came into being in the eighteenth century.  The important laws of story-telling were written for playwrights, and apply as much today as they did in Aeschylus’s time.  The only difference between Drama and Fiction is that in a novel, if you so wish, you can write it in such a way that the reader can put the book away for a month or two and pick it up again much later, whereas in a play you have to bowl along and cannot let go at all, not for a second.  I think, on the whole, that the rules applying to crime fiction are nearer to those of Drama than the fairly sloppy rules which are accepted by so-called ‘Literary’ Fiction.

Q         Do you have a favourite part of the writing process?
A          Does any writer?  I think that while we’re doing it we all wish we were doing something else.  While you’re editing the writing seems so easy, while you’re writing the research all seems so easy, while you’re researching how you wish you were editing.  It’s all pretty hard, but when it’s all finished you look back and forget how hard it was.  I believe having a baby has a similar effect.

Q         You are a woman of many talents, having worked as an actor with The Royal Shakespeare Company, repertory companies in Birmingham, Nottingham, Liverpool, Leeds and Glasgow, as well as touring companies like Paines Plough and a stint in the West End. How do you balance your acting career with being a writer?  Do you allocate a part of a day to writing?
A         I do everything all the time whenever the opportunity presents itself.  While I was in The Vortex in the West End I was also filming the TV series Mr Majeika, publicising three books and judging the Susan Smith Blackburn prize.  The character I played was not on stage during Act Three and so I used the time sitting trapped in the dressing room to write my adaptation of Hangover Square. I have a very low boredom threshold.  I have never been on a beach holiday or had a week lazing around.  It’s not in the mentality.  Life’s too short not to be having a go at everything while we still can.

Q         I was fascinated to learn that due to a quirk of fate you were born in a red gypsy caravan, which stood in a corner of the grounds of the ancient Abbey of Amesbury, halfway between Stonehenge and Woodhenge.  Can you tell us how that came about?

A      My family are from Liverpool.  After the war Liverpool went into a terrible decline.  My mother, an enterprising Irishwoman, talked my father into moving south to find work.  They had no money and nowhere to go, so they bought a gypsy caravan for 10/- and a local vicar let them keep it in the Abbey Orchard, just outside Amesbury.  The doctors wouldn’t come to gypsies, so my father delivered me.  We lived in that tiny space with no running water: two adults, a baby and a Great Dane.  I slept in a box under their bed. We had a donkey called Puck, a homosexual goat and a gobbling turkey, which frightened the hell out of me.  I remember my mother cooking Scouse (Irish Stew) in a huge cauldron over a bonfire.  They both went out to work in the day and left me with the dog. Today I suppose they would be arrested.  But I wouldn’t change my mad childhood for anyone’s cosy security. And when we went home I had Liverpool too, with my grandparents’ tiny terraced house, with a tin bath in the kitchen and an outside loo, and all the rough excitement of the city in those days just before The Beatles became a world phenomenon


Q        So an actor, a writer, and I also understand an artist. What’s next?
A         Anything which Fate chucks at me, I suppose.  I have a few book ideas up my sleeve, a directing project a TV script to finish…  Try me. I’m game for just about anything.

Thank you Fidelis for a fascinating interview. What a marvellous varied career. For more information about Fidelis visit her web site at www.fidelismorgan.net

Update:   Fidelis is doing a show of The Female Wits with Celia Imrie, Sian Thomas and Juliet Cadzow. And a crime panel with Ruth Dudley Edwards and Lauren Henderson,. Also has written the mystery coach tour.
ALL for The Isle of Wight Literary Festival 12th-14th October  www.isleofwightliteraryfestival.org