‘Cause of Death’ by Jane Adams 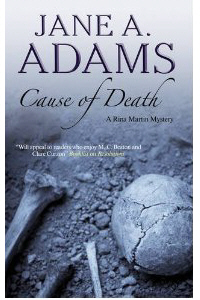 Published by Severn House,
May 2012.
ISBN:  978-0-7278-8173-1
Things have been quiet during the summer at the boarding house Peverill Lodge, run by Rina Martin.  Life continues tranquilly for the Peters sisters, Bethany and Eliza.  Tim has had a break-through and TV looms.  The Montmorency twins Matthew and Stephen have relieved Rina of culinary duties, once breakfast is over.  And although DI MacGregor (Mac) has moved out having entered a relationship with a lady called Miriam, he drops in regularly.  And now Rina has been approached to revive her television career with Lydia Merchant Investigates.

Young George is now fifteen and making progress with his school work thanks to the influence of Ursula. But storm clouds are gathering. Karen, George’s elder sister, is back in Frantham.  Karen has powerful enemies so whatever brings  her back must be important,  as there are two interested parties who will shoot without asking questions first.  Stan Holden is also back and like Karen he brings trouble with him.

The discovery of some bones, have Mac and Andy Nevins trawling through missing persons going back fifteen years.  But the bones will bring back the past to someone who had thought that the past was well and truly buried.   But as we all know truth has a way of coming to the surface it’s just a matter of time.

Jane Adams was born in Leicestershire, where she still lives. She has a degree in Sociology, and has held a variety of jobs including lead vocalist in a folk rock band. She enjoys pen and ink drawing, martial arts and her ambition is to travel the length of the Silk Road by motorbike. Her first book, The Greenway, was shortlisted for the CWA John Creasey Award in 1995 and for the Author's Club Best First Novel Award. Jane writes several series.  Her first series featured Mike Croft. Three books featuring DS Ray Flowers. Seven titlesfeaturing blind Naoimi Blake, and her latest series featuring Rina Martin. Cause of Death is the sixth in the series. Jane has also written three standalone novels. She is married with two children.