‘The Sins of the Father’ by C B Hanley 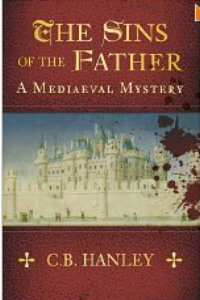 1217. England is in a parlous state, still recovering from the cruel and tyrannical rule of King John, its present king a child, John’s son Henry III placed on the throne by King Louis of France wishing to dominate England in France’s interests. But Henry is now under the guardianship of William Marshall Earl of Pembroke, fighting to throw off the French yoke. The other great nobles of England are jockeying for power. One of these is William de Warenne, Earl of Sussex; another is Ralph de Courteville, Earl of Sheffield. When de Courteville arrives uninvited with his entourage at de Warenne’s castle of Coningsbrough in Yorkshire, he is less than welcome but de Warenne dare not offend him since he knows that de Courteville is looking for an excuse to blacken his name with the Earl Marshall and thereby add de Warenne’s lands to his own. So when de Courteville  is  found, his throat cut, on the top of the castle’s tower, it is imperative that de Warenne, to save himself from being implicated in de Courteville’s death, find the murderer. Such an investigation would normally, under the customs of the time, be carried out by the castle’s bailiff but he is gravely ill and de Warenne calls upon the bailiff’s son Edwin Weaver to carry this out in his father‘s place; moreover, it must be done by sunset of the next day. Edwin is highly clever and observant (and can read - unusual among all classes at this time) but the task is nearly beyond him. However, succeed he does, although at the cost of great sadness to himself.
This is a well-written work of meticulous scholarship. The author, whose first novel this is, has a Ph.D. in mediaeval studies and has used her knowledge to good effect, while not allowing the story to become bogged down in historical facts and period detail.
----
Reviewer: Radmila May

C B Hanley (who also writes as Catherine Hanley) was born in Australia; since moving to the UK she has lived in Somerset and Sheffield, and is currently based in the Midlands with her husband and three children. Her love of medieval studies led to a PhD and a number of academic and non-fiction publications, but she decided that writing fiction was more fun.
Posted by Lizzie at 16:35