‘I’ll Catch You’ by Jesse Kellerman 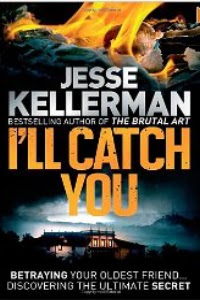 Arthur Pfefferkorn taught creative writing at a small college on the Eastern Seaboard.  Many years ago Arthur had published a novel called Shades of the Colossus.  His book had received mild acclaim and then died along with his literary aspirations. Conversely his oldest and best friend had turned out to be a bestselling thriller writer.  But now Arthur reads in the paper that his friend William de Vallèe is lost at sea.  Pfefferkorn  realises he hasn’t seen Bill for a long time mainly as he is aware of the envy he feels that Bill had outshone him professionally – he had even married the only woman Pfefferkorn had ever loved.

As he recalls their earlier friendship he feels regret and grief that his own feelings of failure affected their relationship, and when he receives an invitation to the funeral he contacts Bill’s widow, who beeches him to come to the funeral. When he does she encourages him to stay a day or two, and during that time Arthur finds an unpublished manuscript, Bill’s latest book, and in a fit of desire to be famous he steals the book.  In doing so he sets in motion a series of events that will plunge him into a world hitherto unknown to him.  A world where nothing and no one is what they seem. A world of shadows, where no one can be trusted.

I think this is what is called a roller-coaster of emotions.  Well whatever it is called, I loved it.  And page 182, I will read and re-read, if you have ever, loved or hated moustaches, you need to read the description of the man with a moustache that had submoustaches that in turn had sub-submoustaches, each of which might be said to be deserving of its own area code!

A story of failure, success, love, betrayal, espionage, and the subtlety of the double-cross, this book is highly recommended.
------
Reviewer: Lizzie Hayes 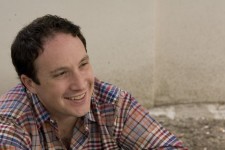 Jesse Kellerman was born in Los Angeles in 1978, to Drs. Jonathan and Faye  Kellerman, were, respectively, a clinical psychologist and a non-practicing dentist, the latter pursuit being a lot like that of a non-practicing Buddhist, insofar as both dentists and Buddhists believe that life is pain. He attended Orthodox Jewish elementary and high schools. Before college he took a year off to study at a men’s religious seminary in Israel.  He then enrolled at Harvard University where he studied psychology, with an emphasis on evolution and antisocial behavior. But his true interest was theater.  Jesse has published four novels: The Executor, The Genius, Trouble and Sunstroke. He also holds a Master’s of Fine Arts in theater. He has won several awards for his writing, including the 2003 Princess Grace Award, given to America’s most promising young playwright, and the 2010 Grand Prix des Lectrices de Elle, for Les Visages (The Genius). He lives with his wife and son in California.
Posted by Lizzie Hayes at 13:28