‘Blood on the Marsh’ by Peter Tickler 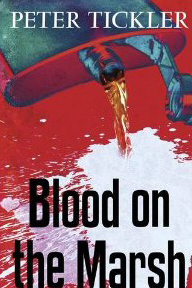 On her first day back at Cowley station following a period of extended leave, Detective Inspector Susan Holden has a suspicious death to investigate.  An elderly lady in Sunnymede Care Home has died from suspected heart failure, but the autopsy has revealed a high level of morphine.

With Sergeant Fox, Susan Holden heads off to speak to the staff at the care home. On the surface the home looks reasonably well-run and normal, but as Susan and her team dig deeper they find that things are not as they initially appeared.  One of the staff has been suspended, and certain staff relations are strained.  And when they speak with the family of the deceased they meet with hostility and anger, much of it directed at Fran Sinclair, the assistant manager of the care home.

Whilst the team’s initial enquires were tentative owing to the possibility of accidental death, the second death is definitely murder, so the direction of the investigation changes.

For all you lovers of the ‘whodunit’, this is a must read.  As Susan Holden and her team delve into the lives of the family, the care home and the visiting doctors, surprising things come to light. As the reader becomes gripped with the investigation, we also learn more of the lives of Susan Holden and her team, Sergeant Fox, and the police constables Lawton and Wilson.  A well-rounded, cleverly plotted mystery, set in that capital of crime – Oxford.

The story is told by multiple voices, interspersed by a first person narrative by David Wright.  Blood on the Marsh is the third in the series, and I eagerly await the fourth.
-----
Reviewer: Lizzie Hayes
Earlier books in the Oxford series are, Blood on the Cowley Road, and Blood in Grandpont. 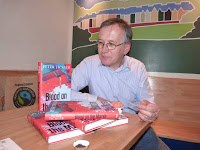 Peter Tickler has lived and worked in Oxford for nearly thirty years. He also studied at Oxford, reading classics at Keble College.  Previously a successful non-fiction author, Tickler turned his hand to novels in 2008.
Posted by Lizzie at 15:46